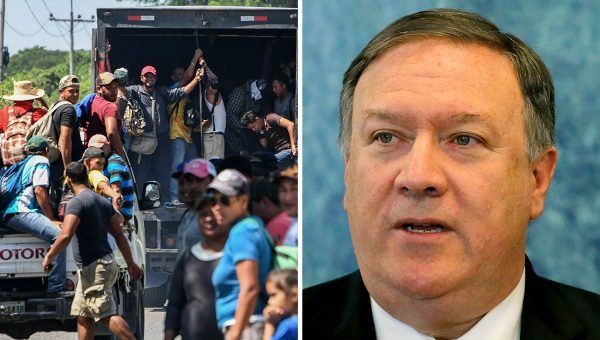 Arrests of nearly 100 ISIS terrorists in Guatemala has a Washington, D.C., nonprofit government watchdog sounding alarms on that huge caravan of migrants marching north from that country and Honduras through Mexico to the U.S. border.

“Guatemala has long been known as a major smuggling corridor for foreigners from African and Asian countries making their way into the U.S,” Judicial Watch said Friday [1]. “All this makes ISIS terrorists operating in Guatemala incredibly alarming.”

Guatemalan President Jimmy Morales told the Conference for Prosperity and Security in Central America last week that “not only have we arrested them within our territory, but they have been deported to their countries of origin.” The arrests were made following investigations assisted by intelligence agencies of other countries, which Morales declined to name.

The latest caravan (pictured above left) started in Honduras a week ago and within a few days its numbers  swelled to an estimated 4,000 men, women and children from that country, Guatemala and El Salvador hoping to cross into the U.S. to escape extreme poverty and crime back home. A similar but smaller caravan followed the same plan in April.

Related: Pact Emerging on How to Deal with Migrant Caravan [2]

“A caravan of Central American migrants is making its way north,” Judicial Watch warned in a statement Friday. “They came in droves from Guatemala and Honduras through the Mexican border and for years Uncle Sam rolled out the welcome mat [1] offering housing, food, medical treatment and a free education.”

Also on Friday, Secretary of State Michael Pompeo (pictured above right) said during a news conference with Mexican Foreign Secretary Luis Videgaray in Mexico City that “We are quickly reaching a point that appears to be a moment of crisis. A record number of migrants. Foreign Secretary Videgaray and I have talked about the importance of stopping this flow before it reaches the U.S. border.”

Judicial Watch said terrorists can easily slip undetected into the caravan because minors are not properly vetted despite the fact many in Guatemala and Honduras have turned to criminal gangs committing violent crimes. Judicial Watch pointed to a report [3] from the Texas Department of Public Safety that described how the vicious MS-13 gang’s ranks were boosted by the caravans.

The nonprofit also noted that Prensa Libra, a Guatemalan newspaper, “published an in-depth piece [4] on the inner workings of an international human smuggling network that moves migrants from Afghanistan, Pakistan, India, Nepal and Bangladesh to the U.S.”

“Individuals are sent to Dubai in the United Arab Emirates then flown to Brazil before heading to Colombia. Once in South America, the migrants are transported to Panama before moving on to Costa Rica, then a central point on Guatemala. One Spanish news report refers to Guatemala as a human smuggling paradise [5] because it’s so easy to get fake passports.”

Related: Why Trump’s Threat to Cut Foreign Aid Might Not Stop Caravan [6]

President Donald Trump has made immigration a central focus of his agenda since the beginning with his border wall being a major component of that. He called for the military to confront the latest caravan and has threatened to cut aid [7] to countries that allow them to advance towards the United States.

Trump has already seen some progress with his threat to end foreign aid. Mexico reportedly responded by sending police to its own southern border [8] to stop the caravan from coming through after the threat was made.

The current migrant caravan is the second one this year with the first occurring around April. The migrants intent to claim refugee status but some have raised doubts over who these people really are and whether they are fleeing violence.