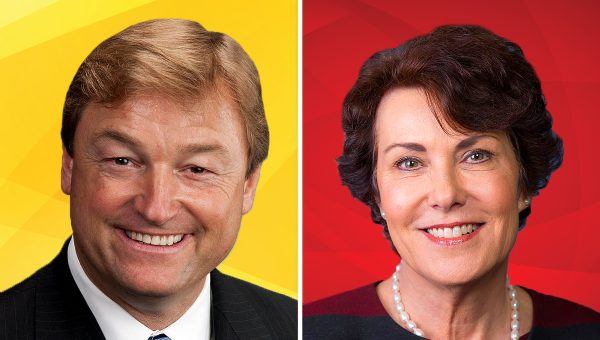 For much of 2018, Sen. Dean Heller (R-Nev.) was a dead man walking, politically speaking.

But Heller, by far the most vulnerable Republican incumbent in this year’s Senate races, is showing signs of life. An Emerson College poll released Monday suggests Heller (pictured above left) is leading his Democratic opponent, Rep. Jacky Rosen (above right), by 7 percentage points among likely voters.

Ordinarily, a single result of 48 percent to 41 percent should be taken with caution. But it comes on the heels of two other recent polls that had Heller up by 2 points.

Prior to that stretch, Rosen had led three out of four public polls dating to June.

“We don’t think this is a done deal, but we definitely see it as leaning toward Heller,” said Spencer Kimball, an adviser to the Emerson College Polling Society.

Kimball said the poll indicates that the few undecided voters left — about 8 percent of likely voters — break evenly between the two candidates when pressed. That contrasts with the Nevada gubernatorial race, where Republican Adam Laxalt leads by 5 points but where undecideds break 62 percent to 38 percent for Democrat Steve Sisolak.

This suggests the final result will be much closer, Kimball told LifeZette.

If Heller could hang on, it would deal a severe blow to Democrats’ hope of recapturing the Senate. That always seemed a long shot, given that so many of the competitive races are playing out in states that President Donald Trump won by large margins in the 2016 election.

“We don’t think this is a done deal, but we definitely see it as leaning toward Heller.”

But some Democrats saw a narrow path to majority. It involved successfully defending their vulnerable incumbents and then picking off two Republican-held seats. Nevada seemed the best bet.

Democrat Hillary Clinton won the state in 2016, and Nevada has been trending Democrat in recent years, fueled by increasing numbers of immigrants and the fantastic growth of the Las Vegas metropolitan area.

Combine all that with a credible Democratic challenger, and many analysts already had written off the GOP’s chances in the Silver State. That left just one more state to flip — an open seat in Arizona, where retiring Republican Sen. Jeff Flake is unpopular; an open seat in Tennessee; or perhaps an upset in Texas, where Democratic challenger Rep. Beto O’Rourke is raising record amounts of cash in his bed to unseat Republican incumbent Sen. Ted Cruz.

But the terrain looks better for Republican Senate candidates across the board in the wake of a confirmation fight that many conservatives believe turned into a horribly unfair smear campaign [2] against now-Justice Brett Kavanaugh over uncorroborated sexual assault allegations involving his teenage years.

Kimball said the national political environment for Republicans has improved since Columbus Day.

“I’m not sure if it’s necessarily that Kavanaugh and court that has changed the game, but it does seem to revolve around that period of time,” he said.

Related: Hillary Clinton Is the ‘Kiss of Death’ for Dems in the Midterms [3]

In Texas, Cruz has expanded his lead. In Tennessee, where Republican Marsha Blackburn had trailed in July and August, she now leads former Democratic Gov. Phil Bredesen in three state polls — the most recent of which put her up by 14 points.

It didn’t help that a secret video [4] made by Project Veritas showed Bredesen campaign aides saying the candidate was lying about his support for Kavanaugh and that he would be a “good Democrat” once elected.

The normal caveats of polling apply. It is just a snapshot, and a lot can change in three weeks. What’s more, the results are based on a best guess of what turnout will be in November. But Kimball said the youth vote, for instance, has not been much higher even in strong Democratic years such as 2006.