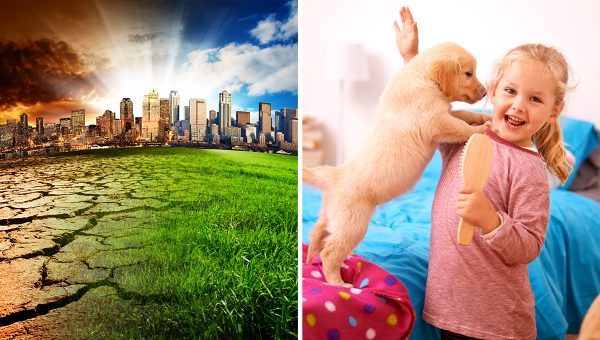 A study just out on Monday from the University of Sydney in Australia puts forward yet another new theory about global warming that strikes a little too close to home: Your canine or feline best friend — your family pet — is probably destroying the environment.

The study, which appears in the online journal Public Library of Science (PLOS), claims our domesticated animals are adversely affecting the climate — particularly in the U.S., where there are 163 million companion animals, the highest number of any country in the world, noted The Daily Wire [1].

“As pet ownership increases in some developing countries, especially China, and trends continue in pet food toward higher content and quality of meat, globally, pet ownership will compound the environmental impacts of human dietary choices,” said the study’s abstract [2].

“Reducing the rate of dog and cat ownership, perhaps in favor of other pets that offer similar health and emotional benefits, would considerably reduce these impacts,” it continues. “Simultaneous industry-wide efforts to reduce overfeeding, reduce waste, and find alternative sources of protein will also reduce these impacts.”

The tangible emotional and health benefits apparently don’t stack up against Spot’s or Whiskers’ carbon pawprint, according to this group, even though a whopping 98 percent of pet owners [3] consider their animal to be a member of the family, according to the Anxiety and Depression Association of America (ADAA).

Additionally, a survey of pet owners found 74 percent of them reported mental health improvements from their pet ownership, while 75 percent reported a friend’s or family member’s mental health has improved from owning an animal, said the ADAA.

Related: We’d Rather Be with Our Dogs Than with Other People [4]

Yet environmentalists pooh-pooh the health benefits in their zeal to save the planet.

“In the U.S., there are more than 163 million dogs and cats that consume, as a significant portion of their diet, animal products and therefore potentially constitute a considerable dietary footprint,” the study’s abstract insists. “Here, the energy and animal-derived product consumption of these pets in the U.S. is evaluated for the first time, as are the environmental impacts from the animal products fed to them, including feces production.”

The problem isn’t exclusive to the United States, though. The popularity of companion animals has grown around the world.

“Americans are the largest pet owners in the world, but the tradition of pet ownership in the U.S. has considerable costs,” says the abstract. “As pet ownership increases in some developing countries, especially China, and trends continue in pet food toward higher content and quality of meat, globally, pet ownership will compound the environmental impacts of human dietary choices.”

For the planet’s good, we must give up our furry friends, the study concludes: “Reducing the rate of dog and cat ownership, perhaps in favor of other pets that offer similar health and emotional benefits would considerably reduce these impacts.” (It doesn’t give recommendations of which other species have less impact.)

Alternatively, the researchers recommend having your pets go vegetarian — yes, you read that right — “something that’s not recommended by veterinarians or animal health and welfare experts, who concede that having some type of meat-based protein is best for your four-legged friends,” as The Daily Wire noted, particularly those with carnivorous forebears.

For a look at how pets make us healthier, see the video below: