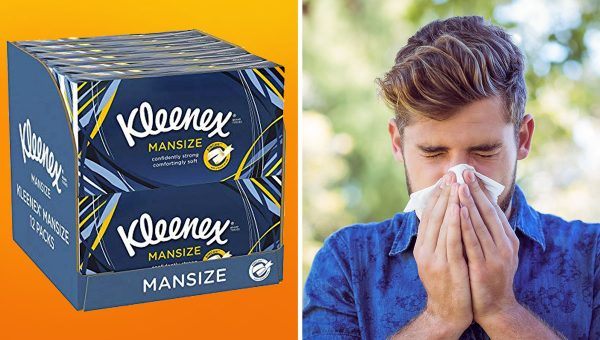 Kleenex maker Kimberly-Clark says it will rebrand its “Mansize” tissues after consumers complained the name was sexist.

The company says that following a “consistent increase of complaints on gender concern,” the product will instead be named “Kleenex Extra Large,” as some media outlets are reporting.

The marketing message on the larger tissues’ packaging describes the product as “confidently strong” and “comfortingly soft.”

Kimberly-Clark said it in “no way suggests” that being both soft and strong is “an exclusively masculine trait,” according to the U.K.’s Daily Telegraph [1], and the company does not think that the “Mansize” branding suggests or endorses gender inequality.

“Nevertheless, as we remain committed to developing the best possible products for our consumers and take any feedback extremely seriously, we decided to renovate our current product and update the product sub-brand as Kleenex Extra Large,” the group noted.

Big question: Has the company blown it with this move? Time will tell.

One Boston-area sales professional who sells products including tissues says the “mansizing” is nothing to be offended about — it’s just marketing.

“To appeal to a new set of consumers — perhaps men aren’t buying tissues like women are, and the company wants to fold men into their core demographic, so they will encourage this buying behavior by telling male consumers, ‘Yes, this product is for you, too,’” he told LifeZette on Thursday.

He added, “But in today’s world, it’s probably a better idea to encourage this buying behavior by males in other ways — through television commercials that include men, for example. Today, even the silliest things are considered ‘anti-woman,’ so companies need to be aware of society’s mood and adjust accordingly.”

Other products that have come under the feminism microscope [2] include socks, deodorant, and baby toys.

A far more serious issue has emerged in the wake of the #MeToo movement, which purports to shine a spotlight on all things unfair to women. Does the movement actually help most women out in the real world?

“The #MeToo movement has weaponized the stories of victims to launch the largest man-bashing campaign this country has ever seen,” Gabrielle Bosché, president and founder of The Millennial Solution and a TEDx speaker based in Washington, D.C., wrote for [3] LifeZette.

Related: Michelle Obama Basically Turns Her Back on Men: ‘Sorry,’ but #MeToo Is Happening [4]

“It has ruined any chance for aspiring women to be mentored by great men and seriously hamstrings any female entrepreneur’s chance to work with male clients,” the best-selling author pointed out.

She added, “I have worked for years to be seen as an expert and formidable professional. I am now seen as a liability.”

“Now, we meet with the door open,” she explained. “Our friendly hugs have turned into awkward handshakes. My frequent lunch invitations have gone all but extinct — all for fear of being labeled the next Matt Lauer or Harvey Weinstein.”

See more about the “Mansize” tissues in the video below.