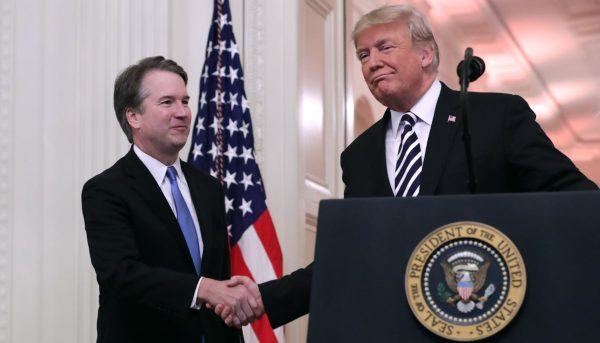 President Donald Trump began Monday’s ceremonial swearing-in of Supreme Court Justice Brett Kavanaugh not with an oath — but with an apology to his nominee, his wife, and his children, on behalf of all Americans.

“I would like to start tonight’s proceedings different than perhaps any other event of such magnitude,” Trump said. “On behalf of our nation, I would like to apologize to Brett and the entire Kavanaugh family for the terrible pain and suffering you have been forced to endure.

“Those who step forward to serve our country deserve a fair and dignified evaluation. Not a campaign of personal and political destruction based on lies and deception. What happened to the Kavanaugh family violates every notion of fairness, decency, and due process.”

“On behalf of our nation, I would like to apologize to Brett and the entire Kavanaugh family for the terrible pain and suffering you have been forced to endure.”

“‘We are gathered here this evening for a truly momentous occasion,” Trump said during the event. “I’ve long been told the most important decision a president can make is the appointment of a Supreme Court justice. In just a few moments we will proudly swear in the newest member of the United States Supreme Court, Justice Brett Kavanaugh.”

Trump was referring to the 11th-hour uncorroborated allegations from three women of sexual misconduct by Kavanaugh in his high school and freshman college years. allegations he passionately denied. None of the witnesses the women said would verify their claims did so.

In response to Trump’s opening comments, Kavanaugh said “the Senate confirmation process was contentious and emotional. That process is over. My focus now is to be the best justice I can be. I take this office with gratitude and no bitterness.

“On the Supreme Court, I will seek to be a force of stability and unity. My goal is to be a great justice for all Americans and all of America. I will work really hard to achieve that goal. I was not appointed to serve one party or one interest but to serve one nation.”

Kavanaugh’s mentor, retired Justice Anthony Kennedy, joined the ceremony as he also celebrated his departure from the court. Kavanaugh once worked as a law clerk [2] for Kennedy and now replaces him on the high court. Kavanaugh’s parents, wife and two daughters, along with the eight current sitting justices, were in attendance as well.

Kavanaugh was officially sworn in Saturday following the Senate’s 50-48 vote confirming his nomination by Chief Justice John Roberts. The newest justice’s confirmation fulfills a key Trump promise from the 2016 presidential campaign: to put conservative judges on the Supreme Court.

Related: A Justice’s Two Daughters Will Never Forget the Healing Words of the President [3]

With Kavanaugh now on the court, it has a conservative majority on many of the issues it is expected to address in coming years for the first time in several generations.