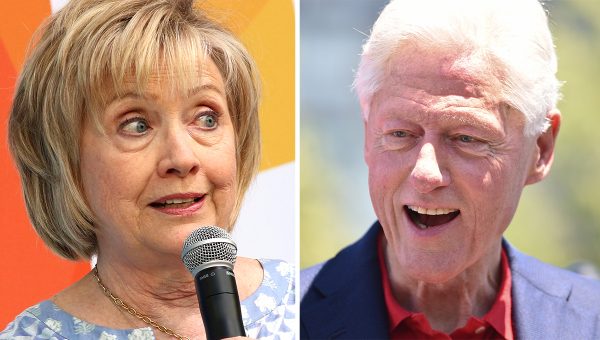 Hillary Clinton is viewed as “the kiss of death” for Democratic candidates in the upcoming midterm election — forcing the former presidential candidate to stay low and campaign only behind closed doors.

Few Democrats are willing to embrace Clinton on the campaign trail, despite the party’s near-universal support for her just two years ago, with many concerned that a high-profile Clinton presence would only dampen the party’s prospects of retaking control of Washington from Republicans.

Throughout the midterm elections, Clinton has rarely rallied together with other candidates, appearing mostly at low-key fundraisers.

“Hillary Clinton is the kiss of death, and she represents the part of the Democratic Party that led to historic losses and that elected Donald Trump president,” a leading Democratic strategist told the Washington Examiner [1].

“Democrats don’t want her to campaign for them because everywhere she goes she carries this stench of death and is the only political figure in America that is less popular than Donald Trump,” the strategist added. “That’s a real testament to her.”

Democrats were relieved after Bill and Hillary Clinton announced that their international 13-city speaking tour [2] wouldn’t begin until after November’s midterm elections.

“I think they’re measuring how they can have the best, positive impact and have kind of decided to wait until after the election,” Sen. Dick Durbin (D-Ill.) told the outlet.

A House Democrat seconded, saying, “When I think of people who have been part of our push to retake the House, I just don’t think of them at all. … I think it’s a very good thing that they’re not being visible. It wouldn’t help our candidates.”

But Clinton, while unwanted at the campaigns, continues to make an impact on the election, just not in a way many Democrats would prefer.

“You cannot be civil with a political party that wants to destroy what you stand for, what you care about,” Clinton said earlier this week. “That’s why I believe, if we are fortunate enough to win back the House and/or the Senate, that’s when civility can start again. But until then, the only thing Republicans seem to recognize and respect is strength.”

The GOP jumped on the comments amid a relentless harassment campaign against their lawmakers during the confirmation hearings for Supreme Court Justice Brett Kavanaugh.

Democrats including Sen. Heidi Heitkamp of North Dakota, whose chances of winning re-election plummeted after her “no” vote on Kavanaugh, had to forcefully come out and denounce Clinton’s remarks.

“That’s ridiculous,” Heitkamp said on CNN’s “Anderson Cooper 360°.” “I mean, I can’t imagine how you get anything done if you don’t bring civility back into politics, and that goes for both sides … I hope that we can find common ground in this country that sexual assault is more prominent than people thought it was,” she added.

But not all is over for Clinton. She did her first public event last week, a roundtable on leadership with J.B. Pritzker, the Democratic nominee for governor of Illinois, according to the Examiner.

Onward Together, a group founded by Clinton aimed at “advancing the progressive vision that earned nearly 66 million votes in the last election,” has been quietly giving out money to Democratic candidates and left-wing groups.

Later this month she’s set to appear with Florida Democratic gubernatorial candidate Andrew Gillum, who’s in one of the most competitive races in this election cycle.

Clinton also is set to headline a couple of fundraisers for the Democratic Congressional Campaign Committee (DCCC), together with House Minority Leader Nancy Pelosi. Next week, Clinton will raise funds with Sen. Bob Menendez of New Jersey as well.

Her influence could also span beyond her in-person appearances. Onward Together, a group founded by Clinton aimed at “advancing the progressive vision that earned nearly 66 million votes in the last election,” has been quietly giving out money to Democratic candidates and left-wing groups.

The PAC boasts of giving over $1 million in grants in its first year. The disclosed financial records show the organization raised only $115,000 in the last year, but because it’s registered as a nonprofit social welfare organization, the actual money raised and the identities of the donors do not have to be disclosed.

According to Federal Election Commission records, the political organization also gave out $110,000 to various Democrats this election cycle.