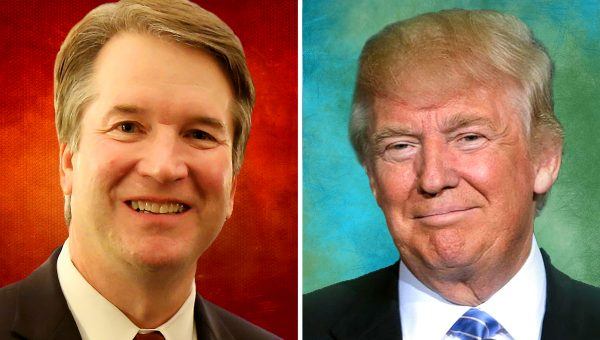 Republicans could retain their majority in the House after the November midterm elections “because of President [Donald] Trump” and his decision to stand by Supreme Court Justice Brett Kavanaugh (pictured above left) following last-minute sexual assault allegations, GOP pollster John McLaughlin predicted Monday night on Fox News’ “The Ingraham Angle.”

“There’s 63 million Trump voters out there who came out in 2016 to vote for us. That was our strategy, to bring millions of new voters from the Rust Belt and the heartland out, to get them to vote for President Trump,” said McLaughlin, who worked as a pollster for Trump’s presidential campaign.

When host Laura Ingraham asked McLaughlin why the GOP has a chance to hold onto the House, the pollster replied, “Because of President Trump.”

Noting that the “typical midterm election” draws “90 million voters,” McLaughlin said each party is “trying to excite their base to get more of their base out.”

“The Republicans, to win all they have to do is run a campaign to say, ‘We have to stop Nancy Pelosi and her colleagues from giving us open borders, raising taxes, killing jobs, government-run health care.”

Democratic senators and liberal activists adamantly opposed Kavanaugh from the moment on July 9 that Trump nominated him. But the judge’s confirmation was nearly tanked after Christine Blasey Ford became the first woman to come forward publicly on September 16, alleging that Kavanaugh sexually assaulted her during a high school gathering 36 years before in Maryland.

Two other women, Deborah Ramirez and Julie Swetnick, also came forward with sexual assault allegations against Kavanaugh. None of the witnesses the three women said would verify their claims did so.

Kavanaugh denied all of the allegations unequivocally, and Trump stood by his nominee. Only one GOP senator — Alaska’s Lisa Murkowski — refused to vote for Kavanaugh as the rest of the Republican senators ultimately unified around him. Kavanaugh was confirmed in the Senate 50-48 on October 6.

“What [Democrats] really wanted the president to do was to either withdraw [Kavanaugh’s nomination] or the Republicans not give him the votes to pass,” McLaughlin said. “And if that had happened, millions of Trump voters would have stayed home.”

“So what’s happened? It’s backfired on [Democrats]. Even ABC today has a battleground poll saying the Republicans are up one in the generic ballot in the 66 targeted districts that are most contested in the House,” he continued.

If Republicans hope to retain their grip on the House, McLaughlin said they must also relentlessly tie the Democratic Party to House Minority Leader Nancy Pelosi (D-Calif.).

Related: Maybe Nevada’s Sen. Dean Heller Is Not a Goner After All [1]

“So what you’ve got is, you’ve got Nancy Pelosi, who’s really unpopular — in our September survey she had a 55 percent unfavorable rating, only 30 percent favorable,” McLaughlin said. “The Republicans, to win all they have to do is run a campaign to say, ‘We have to stop Nancy Pelosi and her colleagues from giving us open borders, raising taxes, killing jobs, government-run health care.”

The pollster also insisted that rallying around Trump will help vulnerable GOP candidates in competitive states or districts in both the House and the Senate to energize Republican voters and boost their chances of winning.

“Look — In the Trump campaign … the president went after [2016 Democratic presidential nominee] Hillary Clinton. He never backed down. He was the right person to chase her on the issues, to challenge her on corruption, to challenge her on … her vision of America versus his,” McLaughlin said.

“And [Trump] didn’t back up on trade or immigration when all the elites and the know-it-alls in Washington told him, ‘You can’t talk about those things.’ He went right for it,” he added.