At a Heritage Foundation reception during the Reagan years, a pretty young blonde woman walked up to me one evening and brazenly told me that I would look better if I shaved off my mustache.

I’d had a mustache since the mid-1970s, but sometime thereafter I shaved it off and my wife, Zorine, said, “You look better without a mustache.”

I’d never clapped eyes on the young woman before, but it was Laura Ingraham, who at the time was working in the Reagan administration as a speechwriter. 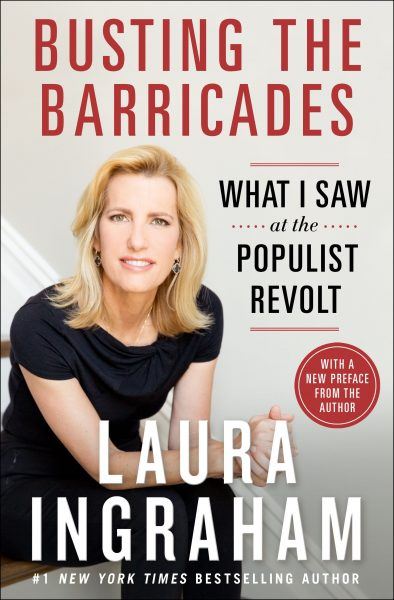 Years later, after she became a popular national radio host, dispensing political advice and humor, she became disenchanted with Republican House Majority Leader Eric Cantor of Virginia. Cantor, like many others, had succumbed to the siren song of Washington’s elites, of access and power and principles shed.

Cantor had supported the corrupt bailout of Wall Street in 2008, without advocating an investigation into how criminal bankers and crooked brokers brought America to the brink of financial ruin.

Wall Street had lobbyists all over Washington (and eager helping hands inside the George W. Bush administration), and they successfully lobbied for the money with no strings attached, no criminal investigation, nothing. The bailout of Wall Street remains to this day the greatest heist in American history, at least since we picked up the Louisiana Purchase for a song.

Ingraham backed Cantor’s long-shot primary opponent, Dave Brat, a Randolph-Macon College economics professor. She went into the district to campaign for Brat, raise money for him, and to sail against the Establishment wind. Cantor had millions to spend. Brat had thousands to spend.

Brat won in an enormous upset. It was the shot heard round the world, and many believe it was the beginning of the rebirth of revolutionary conservatism, throwing off Bushism.

Some also point to the uprising against George Bush’s nominee to the Supreme Court, Harriet Myers, a wholly unqualified individual. Laura had a large hand in opposing Myers.

Fast-forward to 2015. My firm, Shirley & Banister, was toiling for Gov. Scott Walker of Wisconsin for the 2016 GOP presidential nomination. Walker was a solid  conservative but just wasn’t catching fire.

MORE NEWS: ‘We Now Have the Smoking Gun’: Jack Posobiec Weighs in on the Twitter Files

But an even longer shot, real estate developer Donald Trump of New York, was catching fire, much to the shock and surprise of the Washington political Establishment.

As Trump rose in the polls, more and more Establishmentarians kept saying “naw,” including me, and I’d been a conservative revolutionary my whole life since going door-to-door for the GOP presidential nominee, Sen. Barry Goldwater, in 1964 at the age of eight.

Watching the Sunday shows became an exercise in absurdity. The more Trump rose, the more the Establishment GOP consultants of the world mocked Trump’s candidacy. (Point of historical fact: The GOP consultant industry had supported former Florida Gov. Jeb Bush’s candidacy in 2016, and in the past had supported the presidential aspirations of Sen. Lamar Alexander, Sen. Bob Dole, Gov. Mitt Romney and Sen. John McCain, losers all.)

I know of no industry where you can be so wrong, so often, and still get rich and famous. Turn on “Meet the Press” many Sundays, and there is inevitably a failed GOP consultant dispensing pearls of wisdom.

Related: Does Trump Measure Up to Reagan? What You Must Know

In defense of the GOP industry, I know of few in Washington or the Republican Establishment who saw the coming Trump phenomenon. But Zorine and Laura did. Each time I expressed doubts about Trump, Zorine would say, “Just watch, he’s saying things that are on people’s minds.”

Each time I emailed or spoke to Laura, she’d say, “Just watch, he’s saying things that are on people’s minds.”

So it stands to reason that great attention should be paid to Laura’s new paperback, “Busting the Barricades: What I Saw at the Populist Revolution” (All Points Books/St. Martin’s, Oct. 9, 2018). She offers abundant acumen and new information. Originally released last year as a hardbound book, “Billionaires at the Barricades,” a New York Times best-seller, this version contains a new and important preface.

There was a book published in 1990 titled “What I Saw at the Revolution: A Political Life in the Reagan Era,” which was a sometimes severe account of the two years that author Peggy Noonan spent in the Reagan administration. But this book by Ingraham is much more about the recent history of the conservative movement — and the populist uprisings of both 1980 and 2016.

And she has a long memory. Good. Ingraham recounts a mean, cruel (and untrue) thing said by neocon Bill Kristol about President Ronald Reagan. Kristol, it must be noted, hasn’t supported a winning candidate in years. In 2016, he was touting the presidential candidacy of a neocon columnist.

Ingraham’s wisdom comes in large part from her radio show, “The Laura Ingraham Show,” which runs three hours a day. She gains an insight and political perspective that eludes the insiders because she listens to callers from across the country. It is a daily national focus group.

Reagan gained a similar insight by reading and answering his mail. He wasn’t much interested in what they said on NBC, but he was very interested in his mail and small-town newspapers. Both Ingraham and Reagan stay and stayed grounded by ignoring the insiders and listening to the outsiders, much the way the Framers intended our system of government to work.

She, like Trump and before them, Reagan, identified the problem-makers of America, the political, media and economic elites. She correctly notes the elites have never been right about anything. Anything.

And unlike so many, she never shrinks from criticizing the elites, never afraid she might not be invited to some Washington dinner party. Besides, Ingraham would rather be with her three children.

There have been some good books analyzing the Trump phenomena (and some truly awful ones, too), but Ingraham’s definitely falls into the former category. It will become an important source for future books about the rise of Trump and the reappearance of populism.

Her book is not perfect. She flirts too close a couple of times to comparing Trump and Reagan; but in her defense, others have done the same. Also, Trump is just midway through his first term. We won’t be able to judge his place in history until long after his second term, which remains to be seen. (I am not making that mistake again!)

But she also does not pull punches in criticizing Trump, beginning with the preface, noting that Trump did not pick good personnel in achieving his goal of remaking Washington and draining the swamp. Still, it took 150 years for a decent biography of Andrew Jackson to be written, by Arthur Schlesinger. Trump won’t have to wait so long.

There have been some good books analyzing the Trump phenomena (and some truly awful ones, too), but Ingraham’s definitely falls into the former category. It will become an important source for future books about the rise of Trump and the reappearance of populism and his nothing less than phenomenal election by the “deplorables” of America.

After writing eight books (with many more to come, the Lord willing), I read books for utilitarian purposes, but I also read books for pleasure. “Busting the Barricades” is a book one can learn from as well as enjoy.

Her insights are unique, and her integrity, like too few in the GOP Establishment, is beyond question. And I learned a long time ago to pay attention to Laura Ingraham.

Craig Shirley is a New York Times best-selling author and presidential historian. He has written four books on President Ronald Reagan, along with his latest book, “Citizen Newt: The Making of a Reagan Conservative,” about the early career of former Speaker of the House Newt Gingrich. He lectures frequently at the Reagan Library and is the Visiting Reagan Scholar at Eureka College in Illinois, the 40th president’s alma mater. He also wrote the critically acclaimed “December 1941.”

Craig Shirley is a presidential historian and Reagan biographer. He's written four books on Ronald Reagan, is working on several more, and is the author of the New York Times best-seller, "December 1941." His newest book is "Mary Ball Washington: The Untold Story of George Washington’s Mother," just published in December 2019. He is the Visiting Reagan Scholar at Eureka College in Illinois and has taught courses on Reagan at the University of Virginia.