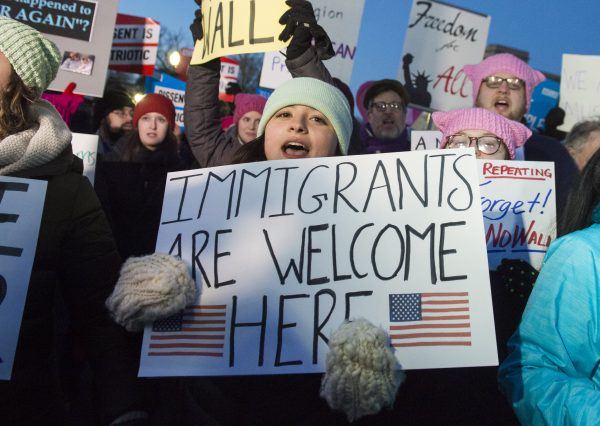 The State Department’s announcement that President Donald Trump’s administration likely will cap refugees in the coming year at the lowest level ever has set off a fierce debate along familiar ideological fault lines.

Secretary of State Mike Pompeo this week said the proposed cap would be 30,000 for the fiscal year starting October 1.

This is down from last year’s 45,000 and represents a 74 percent cut from the last ceiling that former President Barack Obama’s administration set, at 115,000.

The president will make the final decision after a process of consultation with Congress.

Critics cast it as a cold-hearted move to slam the door on persecuted people from all over the world.

“Cutting refugee numbers while the world faces the worst displacement crisis in history is unconscionable. This is the most recent example of Trump exploiting his executive power to put into motion his anti-family, anti-refugee, anti-immigrant agenda,” the Value Our Families Coalition said in a statement on Tuesday.

“With or without Congress, the Trump administration is putting innocent lives in jeopardy. He is deliberately dismantling the lifesaving refugee resettlement program blow by blow, leaving many refugee families separated as they await the resettlement of their loved ones, and abandoning thousands of other refugee families who will now not have a chance to rebuild their lives in safety.”

But Nayla Rush, a senior researcher who studies refugee policy at the Center for Immigration Studies, told LifeZette that reducing refugee resettlements from overseas would allow the State Department and U.S. Citizenship and Immigration Services (USCIS) to put more resources toward whittling down a backlog of asylum cases that now totals 800,000.

“You have limited resources within USCIS and the State Department for these processes,” she said.

Those 800,000 asylum seekers already are in the United States, either because they overstayed a visa or came across the border and claimed they have a credible fear of persecution in their home countries.

“I think it’s fair that they should get the priority,” Rush said.

Pompeo said this week that the new cap would allow the government to process more than 280,000 of those asylum cases.

“These expansive figures continue the United States’ longstanding record of the most generous nation in the world when it comes to protection-based immigration and assistance,” Pompeo said.

The secretary of state noted that the United States had admitted as refugees or granted asylum to more than 1.5 million people since 2000. Counting all immigration programs, some 4.1 million people total have been permanently admitted from refugee-producing countries since 2001.

That comes in addition to the $8 billion that the United States spent in fiscal year 2017 on humanitarian assistance — the most of any country on Earth.

“This year’s refugee ceiling reflects the substantial increase in the number of individuals seeking asylum in our country, leading to a massive backlog of outstanding asylum cases and greater public expense,” he said. “The daunting operational reality of addressing the over 800,000 individuals in pending asylum cases demands renewed focus and prioritization. The magnitude of this challenge is unequaled in any other country.”

On Tuesday, State Department spokeswoman Heather Nauert told reporters that the administration’s philosophy is that it is better to focus refugee relief on programs to assist refugees close to their home countries.

“People think that the ceiling is a target. No, it’s a ceiling.”

Trump came into office vowing to reform the way the government scrutinizes and admits refugees amid concerns that terrorists or extremists could slip into the stream. He ordered a temporary moratorium on new admissions of refugees while the government reviewed its process.

Rush also referenced the case of Omar Ameen, an Iraqi man to came to California as a refugee. Authorities arrested him earlier this year on charges that he murdered a police officer in his home country in 2014 on behalf of the Islamic State terrorist organization.

American officials admitted Ameen as a refugee despite two arrest warrants issued by the Iraqi government.

“We can’t say the system is perfect,” Rush said.

No system can be foolproof, she said, but she added that it has improved.

“Remember, it’s different vetting than before,” she said.

Although the Trump administration capped refugee resettlements at 45,000 in the current fiscal year, only 19,899 actually have been admitted in the first 11 months of the fiscal year. Rush attributed that to more rigorous vetting and the temporary freeze under the travel ban.

“People think that the ceiling is a target,” she said. “No, it’s a ceiling.”

With new procedures already in place, however, Rush said America’s refugee totals may well exceed the current fiscal year even with a lower cap next year.