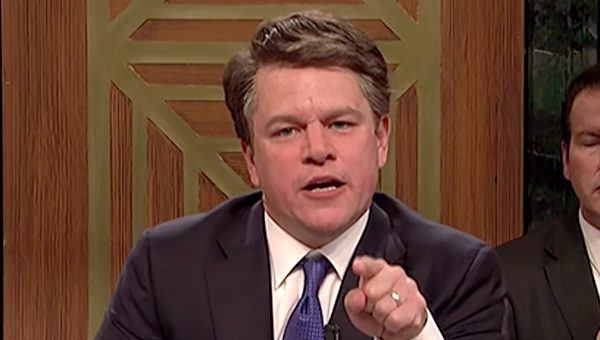 In classic fashion, “Saturday Night Live” kicked off its new season with a cold open using Supreme Court nominee Brett Kavanaugh’s emotional testimony this past Thursday before the Senate Judiciary Committee as fodder.

Actor Matt Damon played the nominee (he’s seen in character in the photo above) — and portrayed him as a hot-tempered beer lover who doesn’t “know the meaning of the word ‘stop.'”

We shouldn’t be surprised, of course.

Much of today’s pop culture offerings strip the poignancy and heartbreak out of any event or ignore it altogether, and “SNL” is one of the best at that — and that’s not a compliment.

The NBC comedy staple, though it hasn’t been funny in a long time, also likes to turn real heartbreak into comedic material that muffles outrage as it deadens compassion.

Brett Kavanaugh, his wife, his children and his parents are all truly suffering. They wear it on their faces. Christine Blasey Ford seems to be in misery, too.

You won’t see “SNL” or other liberal shows or outlets using Ford’s misery as fodder, however — and they shouldn’t.

But poking fun at her is verboten right out of the gate; first, because most media [2] and many Americans are already on her side to the exclusion of anything Kavanaugh can say, and, second, because she’s a woman — and women are to be believed, celebrated and held aloft to the exclusion of even truth and decency in today’s super-charged political environment.

Today, it is OK for kids to see and hear women say the most base, alarming things [3] because, well, they’re women. So their voices must be heard in the perfect storm that is the #MeToo movement and after the election of a Republican president who espouses traditional values.

The theme of the “SNL” riff on Saturday night? That Kavanaugh is a big drinker with a bad temper who is too attached to his old calendars and his high school friends.

The actor in the skit portraying Kavanaugh’s wife was shown sitting behind Damon, her mouth downturned, her eyes sad as she stared at Damon as he talked.

What’s funny about that? Hearts were breaking around the country in real time as Ashley Kavanaugh’s pain played out across her face and her entire being during Thursday’s emotional testimony. For “SNL,” that pain is used to prop up punchlines.

“First of all, I showed this speech to almost no one, not my family, not my friends, not even P.J. or Tobin or Squee,” Damon said, referring to Kavanaugh’s high school friends.

Kavanaugh himself, who treasures his friends, is mocked for bringing up his calendar and his high school buddies in his testimony.

A male’s virginity was also up for derision in the cold open.

“I didn’t have sex for many, many, many years,” Damon as Kavanaugh said. “All I did was drink a lot and not think about having sex at all. I was the proudest, drunkest virgin you’ve ever seen. And everyone can relate to that.”

There was, of course, a pointed reference to how liberals believe Kavanaugh would act on the bench.

Let’s not fall for this. Let’s not laugh at things that deserve neither laughter nor our precious time.

We need to hang onto our outrage and our empathy no matter what such liberal outlets as “SNL” or others do or say. We defend the qualities of empathy and compassion in the seemingly smallest of decisions, such as turning off the television when it is warranted.

See Brett Kavanaugh, in the video below, deliver his emotional and defiant opening statement on Thursday before the Senate Judiciary Committee.