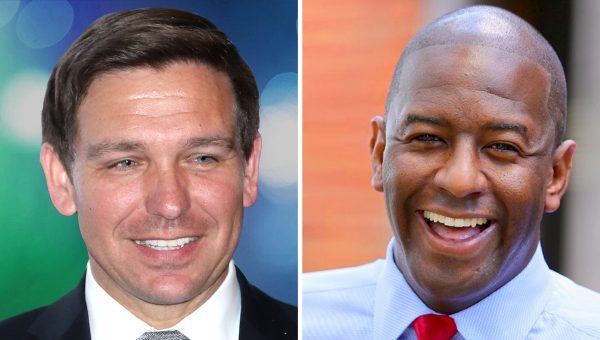 Political contrasts are coming into sharp focus in gubernatorial contests around the country. Clashes between political heavyweights, the Trump endorsement effect, polarizing candidates, shifting partisan alignments, and at least one bold policy proposal are central themes in this year’s election cycle.

Two factors were in play in the August 28 election in which DeSantis emerged the victor: President Trump’s endorsement and a national media platform.

It appeared for most of the year that Putnam was cruising toward victory.  That changed dramatically in July with Trump’s endorsement rally in Tampa. DeSantis wisely used glowing remarks from the president in television commercials cut days later.

Putnam, a former congressman, has longtime ties to Florida. A prolific fundraiser who long led the gubernatorial money race, Putnam ran on a down-home “Florida first” platform. His ads depicted a denim-clad candidate in a barn with farm animals and hay.

Stay tuned to Florida, where the Sen. Bernie Sanders-backed nominee, Andrew Gillum, will be the next Democrat to answer the question: “How far Left can a swing-state turn during the Trump era?”

It is for good reason that the Cook Political Report bills the Georgia match-up as “the most polarized in the country.”

In an unusual move for a gubernatorial candidate, Gillum (pictured above right), who is the mayor of Tallahassee, called for the impeachment of Trump. All eyes are on Florida now, where the most pro-Trump and anti-Trump candidates in the country will square off in November.

Trump-endorsed GOP primary candidates won everywhere with one exception, Wyoming. But nowhere was the impact of Trump’s endorsement more dramatic than in Georgia.

Not so long ago, Georgia Lt. Gov. Casey Cagle defeated Secretary of State Brian Kemp and appeared headed for coronation as the Republican gubernatorial nominee. But once the state’s run-off requirement kicked in, voters lined up behind the Trump-endorsed candidate. In the end, Kemp crushed Cagle by 40 points.

Related: Mike Braun Has a Plan to Shake Up Joe Donnelly, Political Class [1]

The result is a match-up for the ages. The contrast on race, gender, style, and philosophical approach between Abrams and Kemp reveals literally no common ground. It is for good reason that the Cook Political Report bills the Georgia match-up as “the most polarized in the country.”

Massachusetts Gov. Charlie Baker is the most popular governor in the country and is widely seen more as a problem-solver, management type than rabble-rouser politician. Popular Maryland Gov. Larry Hogan, meanwhile, is benefiting from a Democrat opponent who has struggled to consolidate support within his party and lags in fundraising.

Conversely, Illinois Gov. Bruce Rauner eked out a politically damaging primary victory over a conservative challenger and has struggled to enact his fiscal reform agenda.

The GOP’s northeast advance may not be over. Republicans in Connecticut are betting the Nutmeg State is the latest blue-to-red success story. Unpopular Democratic Gov. Dannel Malloy, who is not seeking re-election, is noted for his tax-and-spend liberal orthodoxy, driving away residents and business and presiding over a chronically underperforming state economy.

Republican businessman Bob Stefanowski pledges to eliminate the state income tax over an eight-year transition period, a significant about-face on tax policy that could provide a much-needed jolt of economic confidence. Much of Stefanowski’s success will ride on communicating the benefits of that policy to skeptical independent-minded voters long accustomed to big government.

Cuomo and Nixon Fight Over Who Is Biggest Trump Critic [2]

Such a volatile mix of candidates, policies and partisanship will be fascinating to watch. Expect Trump to again defy political tradition and aggressively campaign for his chosen nominees, thereby guaranteeing plenty of political theater.

The stakes are high as these gubernatorial contests will, in many respects, chart the future of conservative policy priorities in state capitals, where innovation and results typically materialize faster than in Washington, D.C.

Former Gov. Robert Ehrlich was Maryland’s chief executive from 2003 to 2007. He previously served four terms in the U.S. House of Representatives. He is the author of “Bet You Didn’t See That One Coming: Obama, Trump and the End of Washington’s Regular Order.”​ Jim Pettit, a public policy consultant, worked in the Ehrlich administration and Maryland Gov. Larry Hogan’s 2014 campaign.