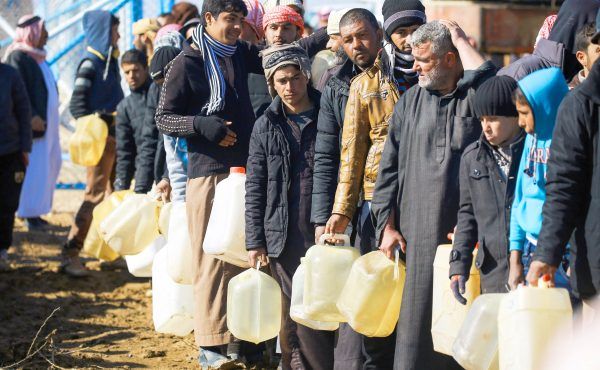 America’s refugee program cost taxpayers more than $125 billion over a 10-year period, according to a Department of Health and Human Services (HHS) report to Congress on a proposed cut in the émigré cap [1].

The report accounts for refugees resettled from abroad, foreigners in the United States granted asylum, and people participating in special programs set up for Iraqis, Cubans, Haitians, and Amerasians from Vietnam.

The cost to federal taxpayers for refugees and individuals granted asylum in fiscal years 2005 through 2014 came to $74.7 billion, plus an additional $21.9 billion for state matching funds for programs available to refugees.

The total cost was $96.65 billion. Including spouses and children, the overall cost to state and federal taxpayers rises to $125.696 billion.

In a speech to the U.N. General Assembly on Tuesday, President Donald Trump alluded to the cost in arguing that U.S. generosity is better demonstrated near locations from which refugees come.

“As we see in Jordan, the most compassionate policy is to place refugees as close to their homes as possible to ease their eventual return to be part of the rebuilding process,” he said. “This approach also stretches finite resources to help far more people, increasing the impact of every dollar spent.”

The Trump administration last week proposed setting the cap on refugees for fiscal year 2019 to 30,000, down from 45,000 in the current fiscal year and the lowest number ever.

The nearly $126 billion estimated cost over 10 years, however, represents but a fraction of the total taxpayer investment. It does not include more than a dozen other programs, such as Social Security, various tax credits, education spending, and other welfare.

Don Barnett, a fellow at the Washington-based Center for Immigration Studies (CIS), told LifeZette that it makes sense to take a comprehensive approach to assessing refugee costs that go beyond just the relocation expenses.

Unlike other immigrants, who must wait five years before they are eligible for government-assistance programs, refugees and individuals granted asylum immediately can receive welfare.

“The costs are staggering. The costs are truly staggering,” said Barnett, who worked on refugee policy as an official with the U.S. Information Agency before moving to CIS. “If we just look at how much it costs to get there, that’s just bus fare.”

The government report estimates that in a typical year, major HHS programs cost about $3,300 per refugee. A 2015 study [2] by CIS, which favors lower levels of immigration, attempted to account for a broader range of costs imposed by refugees. The study found that the five-year cost of relocating refugees from the Middle East came to $64,370 per person and $257,481 per household.

That is 12 times what the U.N. estimated it cost to house a refugee in a country neighboring his homeland. While refugees pay some taxes, the study concluded it was too little to narrow significantly the costs incurred by the government.

“That money could be used helping many, many more people there,” Barnett said. “The money goes further — at least 12 times further.”

Alex Nowrasteh, an immigration policy analyst at the libertarian Cato Institute, did not dispute the government’s cost estimates.

“It’s an artifact of our really bad refugee system,” he said.

A better approach than a bureaucratic, taxpayer-funded refugee system, Nowrasteh said, is to allow private citizens and organizations to sponsor refugees and take financial responsibility for them. He said Canada has such a system and that the United States has had similar policies in the past.

But Matthew O’Brien, director of research at the Federation for American Immigration Reform (FAIR), said most refugees want to go home.

“FAIR”s position has always been that it’s better to spend resources on refugees near where they crisis is,” he said.

Even the $64,370 estimate by CIS may understate the actual cost of refugees, O’Brien said. He pointed to such expenses as additional costs to the criminal justice system, strain on emergency rooms, and ambulance usage.

“A lot of them are difficult to quantify because no one’s collecting the data,” he said.

Chris Chmielenski, deputy director at the low-immigration advocacy group NumbersUSA, said the taxpayer burden is one reason why refugee resettlement should be a last resort, reserved for people who would be persecuted in their home countries. That does not apply to the vast majority of refugees who flee war, natural disaster or other calamities, Chmielenski said.

“The only ones who should be permanently resettled are ones who have no chance of returning to their home country.”