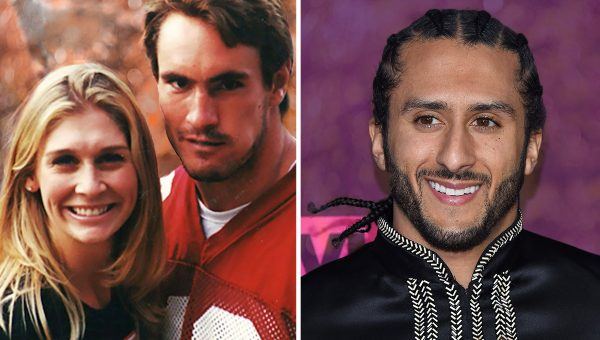 Pat Tillman, the NFL star who enlisted in the Army and tragically died in combat (shown above with his wife from years ago), has become embroiled posthumously in a controversy surrounding another NFL player, Colin Kaepernick.

Tillman walked away from a $3.6 million contract with the Arizona Cardinals to enlist in the Army nine months after the 9/11 attacks — and he deployed to Iraq in 2003.

He was killed in Afghanistan in 2004, in what his family and the public believed was a heroic death at the hands of the enemy.

The Pentagon later acknowledged that Tillman was actually killed accidentally by a fellow soldier during an ambush.

Flash-forward to 2018: Colin Kaepernick began kneeling during the playing of the national anthem during a 2016 preseason game as a player for the San Francisco 49ers. He said he was protesting racial injustices and police brutality.

Just recently, the now-former quarterback was named the face of a new ad campaign to celebrate the 30th anniversary of Nike’s “Just Do It” slogan.

“Believe in something. Even if it means sacrificing everything,” the new ad says — Kaepernick’s face is shown in stark black and white.

Related: Chris Kyle’s Widow Has a Message for Nike Over Its New Colin Kaepernick Campaign [1]

Many people were outraged, and they quickly pointed to true sacrifice — namely, Pat Tillman.

Soon, social media became loaded with images of the two men together or of Tillman alone, with the same motto, “Believe in something. Even if it means sacrificing everything,” making a blunt point of the disparity between the two men and their sacrifices.

The congressman joined other conservatives who understand the kneeling protests to be disrespectful to troops and to veterans — who risked everything for our nation.

But Tillman was not a cardboard cutout standing as a monument to patriotism. He was a real young man, a product of his times and his upbringing.

“He was an idealistic, voracious reader who often struggled with the meaning of military service and considered moral conviction a high virtue,” Jon Krakauer, the author of “Where Men Win Glory,” a biography of Tillman, told The Post.

“Pat would have found Kaepernick an extremely admirable person for what he believed in,” Krakauer told The Post. “I have no doubt if he was in the NFL today, he would be the first to kneel. So there is irony about what is going on.”

President Trump invoked Tillman’s death last fall to criticize Kaepernick for kneeling — and soon after, Tillman’s widow, Marie, asked people not to use her husband’s life and service to silence others.

“The very action of self-expression and the freedom to speak from one’s heart — no matter those views — is what Pat and so many other Americans have given their lives for,” she said in a statement.

Nike is standing beside its ads despite the big controversy.

Nike stands beside its ads despite the controversy. “Nike isn’t backing down from its Colin Kaepernick ad campaign — they just released a brand new two-minute commercial featuring the QB — and it’s slated to air during the NFL season opener,” noted TMZ [5].

The president, meanwhile, tweeted out on Wednesday, “Just like the NFL, whose ratings have gone WAY DOWN, Nike is getting absolutely killed with anger and boycotts. I wonder if they had any idea that it would be this way? As far as the NFL is concerned, I just find it hard to watch, and always will, until they stand for the FLAG!”

Just like the NFL, whose ratings have gone WAY DOWN, Nike is getting absolutely killed with anger and boycotts. I wonder if they had any idea that it would be this way? As far as the NFL is concerned, I just find it hard to watch, and always will, until they stand for the FLAG!