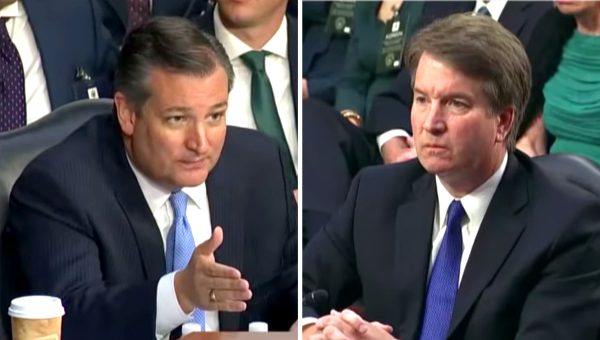 A group of protesters in Washington, D.C., shouted down Sen. Ted Cruz (R-Texas) and his wife in a restaurant Monday night, sending the couple to an early exit in a tense scene captured on video.

The group’s Facebook page states that it is “united” in the fight against the “Nazis, Ku Klux Klan.”

In the first video clip, a group of protesters approach Cruz and his wife at a restaurant table, repeatedly shouting, “We believe survivors!”

“Hi, I’d love to talk to you about Brett Kavanaugh tonight. I’m a constituent, love to know what your vote is gonna be tonight. I know that you’re very close friends with Mr. Kavanaugh,” says a woman off-camera. “Do you believe survivors?”

“Senator, I have a right to know what your position is on Brett Kavanaugh,” she continues.

“God bless you, ma’am,” Cruz says amid the shouts.

“Bless you as well, I really appreciate you,” the woman responds. “I’m a survivor of sexual assault. I believe all survivors. There are now three people who have come forward and who have said that Brett Kavanaugh has attacked them. I know that you’re close friends with him. Could you talk to him about that? Could you talk to him about his position?”

Cruz then appears to get up and head for the exit with his wife.

“How are you gonna vote, sir?” the woman asks.

In the second video, the protesters continue shouting, “We believe survivors!” as Cruz is seen struggling to get through the crowd.

“Excuse me, let my wife through,” Cruz says to the hostile crowd.

Sen. Ted Cruz was seen struggling to get through the crowd.

As Cruz nears the exit, a woman is heard shouting, “Are you going to confirm your best friend Kavanaugh?”

When Cruz leaves the restaurant, the protesters cheer.

A restaurant worker appears, telling the group to leave.

Cruz has pushed for Christine Blasey Ford, one of Kavanaugh’s accusers, to testify in public, according to The Texas Tribune.

“These allegations are serious and deserve to be treated with respect,” Cruz said in a statement.

Related: ‘Finally a Republican with a Backbone’ — Readers React [6]

Cruz’s office did not immediately respond to Fox News’ request for comment.