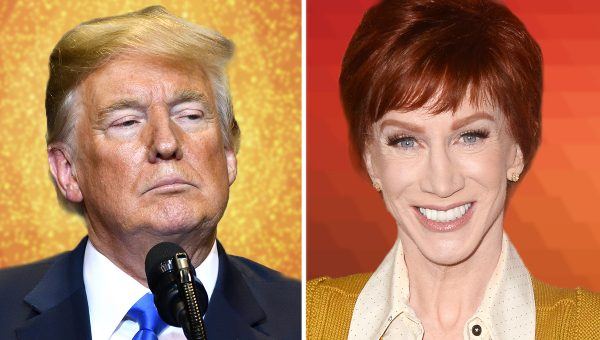 It seems hard to believe, but here it is: Kathy Griffin will receive the Comedian of the Year Award at this year’s Palm Springs Comedy Festival in November.

The comedian will be receiving the award partly for her “comeback” after the stunt she pulled in an infamous photo and video in which she was shown with a mock beheaded photo of President Donald Trump.

“We didn’t think long about who should be named Comedian of the Year for the festival’s inaugural year,” said Paul Cruz, the director of the festival, according to The Hollywood Reporter [1].

He continued, “It was a no brainer to honor Kathy Griffin. After all that she’s been through, Kathy has pulled off the biggest comeback in entertainment history since Marlon Brando was blacklisted and then went on to win an Oscar in 1972.”

The festival director added about the controversial comedian, “Kathy speaks for all Americans in defense of our First Amendment rights. Kathy is the one comedian that is literally on the minds and mouths of the world. She boldly and bravely spoke truth to power, was blacklisted, harassed and shunned for it, but has now emerged like a fiery phoenix from the ashes. What other comedian can say that?”

Liberals may be celebrating Griffin today, but her material seems almost completely centered around Trump these days.

Posing with a bloody, fake head that resembled the president was something obviously done for shock value.

Griffin admitted as much in a behind-the-scenes video of the photoshoot [2]. When there was real reaction to and consequences connected to the photo, Griffin buckled and apologized [3].

Despite the teary-eyed plea for forgiveness, she has now taken back the apology multiple times [4] and tried to play victim wherever she goes [5].

That’s the comedian of the year? That’s the person who best exemplifies comedy in 2018?

To see Griffin take back her tearful apology to Trump and his family, check out the video below: