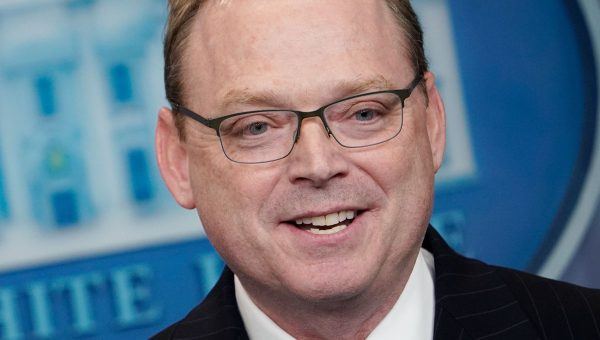 President Donald Trump was elected by promising to help everyday workers through lowering taxes and reducing bureaucratic regulation to encourage economic growth. The economy has improved significantly since he began impending his agenda, but some critics claim the upturn was already in the making.

“One of the hypotheses that [have] been floating around about the economy recently is that the strong economy we’ve been seeing is just a continuation of recent trends,” Hassett said.

“Since we’re the nerds at the White House, we decided that this was a testable hypothesis. So we can go out and estimate recent trends, that is trends that ran in the economy up to the last election, and then compare the recent data to those trends.”

Hassett then turned to several slides demonstrating recent trends in the economy, with the first showing a jump [2] in small-business optimism since the election. The second slide he discussed showed how business investments went up $300 billion since the election. The chart was broken up into nonresidential fix investments, structures and equipment, all of which were trending down before bouncing back around the election of 2016.

“This is something we talked about during my last presser here,” Hassett said. “I think that if anyone were to assert that the capital spending boom that we’re seeing right now is a continuation of the trend that President Trump inherited, then, well, they wouldn’t get a high grade in graduate school.”

Obama entered office amid the severe economic downturn known as the Great Recession. The sluggish recovery that followed took nearly a decade, with some issues still persisting. The economy did start showing more notable signs of improvements in his last year, with steadier employment growth and lower unemployment.

Hassett next turned to a slide showing capital goods orders and shipments, which were both trending downwards until the election. The next slides showed business conditions [4] have improved for purchasing managers and that business applications have surged. He added that entrepreneurship was struggling before the new administration took over.

“One of the ways we can measure entrepreneurship is, if you start a new business, you have to apply for a tax ID number,” Hassett said. “So in this chart, we plotted that EIN applications for new businesses and, if you look at the blue line, it was headed up because we were in a recovery, but there is a clear upwards trajectory way above the trend.”

Hassett then showed slides showing that more working-age adults are entering the workplace, followed by a graph showing an increase in blue collar jobs. The unemployment rate fell to its lowest level [6] since 2000 at 3.8 percent in May. The economy also saw in June more job openings than people unemployed for the first time since 2000.

“I would assert that if you look at the collective body of evidence, the notion that what we’re seeing right now is just a continuation of recent trends, it’s not super defensible,” Hassett said.

“You don’t have to reach far for a theory of what happened. President Trump deregulated the economy; we talked about how that has spurred growth. The tax cuts have had exactly the predicted effect on the economy, that brought businesses back to the U.S. and created jobs for ordinary Americans. It’s clear in the data there has been a trend break.”