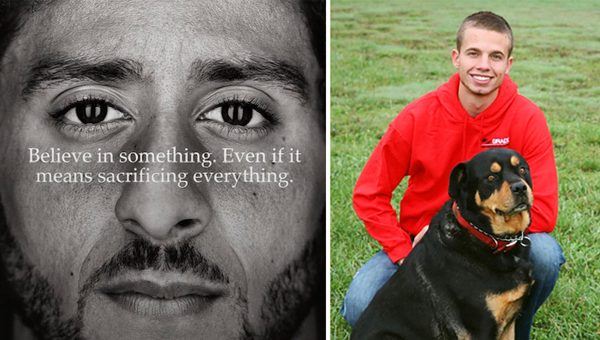 Many Americans have criticized Nike’s controversial new ad campaign featuring former quarterback Colin Kaepernick — the guy who was the original kneeler during the national anthem played or sung before NFL games, beginning some two years ago.

Yet the criticism coming from Trina Hart and her family has been particularly compelling.

He died in a helicopter crash.

Ty Hart was an athlete before joining the Marines; he owned a variety of Nike products.

“He is always missing and nothing fills it,” his mother said, according to KOIN-6 [1].

“So when someone diminishes or makes light of sacrificing everything, it’s very offensive and hurtful,” she wrote.

The family’s frustration is less about Kaepernick’s decision to kneel during the playing or singing of the national anthem than it is with Nike’s actual choice of words to describe that decision.

The ad says, “Believe in something. Even if it means sacrificing everything.”

Trina Hart went on to say, “’Everything’ is your life. My son sacrificed his life. [And] those other 11 men the night my son died sacrificed their lives.”

She added in a note to Nike, “I’m sorry — I don’t find any ‘sacrificing everything’ in what Colin Kaepernick did.”

While Kaepernick alleges that collusion between NFL owners kept him from being signed to a new contract in the league after his anthem-kneeling protests, other people have claimed he was already on his way out of the football league when the protests began — or that his rejection of another offer was responsible.

He has been sponsored by Nike since before he left the league, although the sportswear company is now only announcing this ad campaign.

Trina Hart, of course, is far from the only person to have a problem with the company’s latest campaign.

Taya Kyle, widow of the late Navy SEAL and “American Sniper” author Chris Kyle, joined in on protests of the company [3] and asked why Nike was not using true heroes such as the late Pat Tillman, who left his NFL contract to join the military following 9/11, as examples of “sacrifice.”

Here is part of Trina Hart’s letter to Nike, which KOIN-6 [1] published in full:

Let me tell you about sacrifice!!!!! This is the ultimate definition of it. Right there lies a huge piece of my family. Our son, LCPL Ty Hart. Only 21 years old. Only married 7 months.

I am sure you have heard his name … He grew up 60 miles from your head quarters and even worked on a landscape crew there during the summer. When his casket came home covered by our American flag, the whole state of Oregon watched.

Everything for us has changed. Death does that to a family. Time does not heal. When your missing a family member you don’t get used to it. You try to live but inside your hurting so bad. Every day we live the word SACRIFICE! The agony is unbearable.

The fact that Ty died “serving” this country makes us proud. The fact that he is gone literally breaks our hearts.

Check out one of Nike’s Colin Kaepernick ads below: