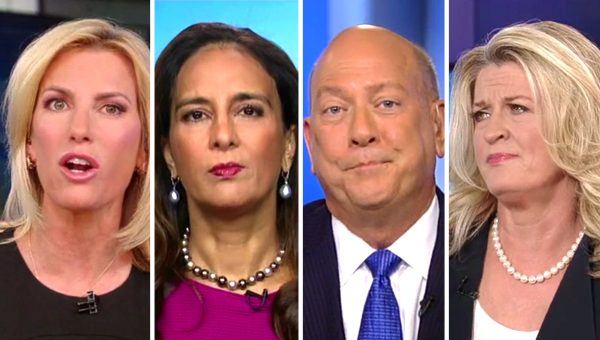 On the “The Ingraham Angle” Monday night, Fox News host Laura Ingraham and her panel discussed The New Yorker piece [1] by Ronan Farrow and Jane Mayer, which came out on Sunday, and its revelation of claims of sexual misconduct against Judge Brett Kavanaugh by a woman named Deborah Ramirez.

The allegations against Kavanaugh date back to the 1980s and her days at Yale, where Kavanaugh also attended college.

Ingraham slammed the standards that are being set for investigating the pasts of any SCOTUS nominees going forward  — standards that Democrats may have to meet as well. She was joined in the discussion by attorney Harmeet Dhillon (above, second from left); Wendy Long (far right), a former law clerk to Supreme Court Justice Clarence Thomas; and Richard Goodstein, a former adviser to Bill and Hillary Clinton.

At the start of the segment Long told Ingraham [1], “This game of playing dirty [investigating each unsubstantiated claim in nominees’ pasts] is going to go on and on — we just can’t cave into it.”

Said Ingraham, “We were all in college, we were all in high school — Harmeet and Wendy were much cooler than I was,” she joked, “but we all did stupid stuff. I don’t know what happened. I do know Kavanaugh. I’ve known him for a long time. This isn’t the Brett I know, and it’s a long time ago, 30-plus years ago.”

Ingraham then asked the Fox News panel, “Is this where we’re going, guys? Are we going back into people’s — how many times did you get drunk at a party, did you go to a keg party, how many girls were there, what’d you do? And then at what point do those allegations, uncorroborated by a contemporaneous witness — when does that get to smear someone who’s had an unbelievably exemplary life as an adult in the workforce, promoting women, advancing the cause of women?”

She continued, “When does this stop, because I find this to be madness, utter madness, as a standard — forget who Brett is, or who [President Donald] Trump is — as a standard. High school, college, we should go back to sixth grade, or is it fourth grade?”

Dhillon said, “No, I agree with you, Laura, this is outrageous, but as Wendy pointed out, the Democrats have been doing this for over three decades. I mean, the shamelessness is Teddy Kennedy, Teddy ‘Chappaquiddick’ Kennedy, standing up there judging other people about their behavior and their standards [during debate in 1987 over Supreme Court nominee Robert Bork], so they have no qualms about doing this … They’re going to come to regret this, because eventually the standard is going to be applied to them, and it’s an impossible standard.”

“When does this stop, because I find this to be madness, utter madness, as a standard.”

Goodstein said earlier in the discussion that an FBI investigation into the second claim against Kavanaugh was warranted, and Dhillon pushed back on that idea.

Related: Look What an Angry Mob Did to Sen. Ted Cruz and His Wife [2]

“Memories fade, and everybody that’s a lawyer knows that eyewitness memory is the most unreliable, particularly when you add alcohol, and you involve the passage of time,” she said.

Ingraham, addressing the New Yorker piece, pointed to The New York Times — and what that publication was unable to corroborate about the second claim of misconduct against the nominee, by Ramirez.

“Sixteen paragraphs [into the Times piece], you learn that she called people, couldn’t get anyone to corroborate her [story], and then one of them [whom Ramirez called], at least, said that she [Ramirez] couldn’t even be sure that it was Brett. The reason The New York Times didn’t go with this is because it was a ridiculous story, and Ronan Farrow, who I think has done some great work — won a Pulitzer — not for this type of reporting. I cannot believe The New Yorker went with this.”

See the heated debate in the video below.