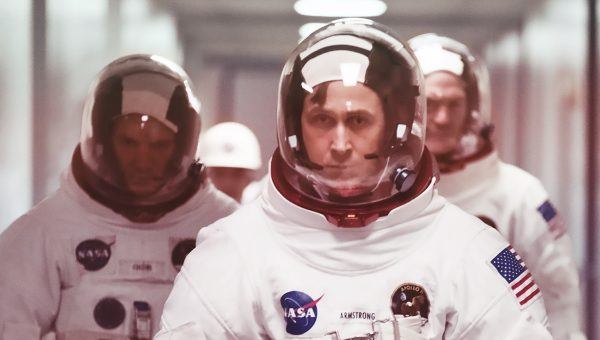 It was American men.

But an upcoming movie about the Apollo 11 mission, “First Man,” almost seems ashamed of the fact that it was Americans [1] — and no one else — who first set foot on the moon, in a spacecraft that was made in the USA. It even said so right there on the side of the mighty Saturn V rocket that took those men to the moon.

Somehow, these facts have become almost shameful to Generation Snowflake, which wasn’t around for Apollo and now seems apologetic that Americans had anything to do with it — assuming they even believe men landed on the moon at all. Apparently, American exceptionalism needs to be taken down a notch.

In the history-rewriting film starring Canadian actor Ryan Gosling as Neil Armstrong, the iconic scene of this country’s flag being planted on the moon — where it still “flies,” to this day — is reportedly omitted [2]. (The image shown above is a scene from the movie.)

This is like casting Bruce Willis to play Martin Luther King in a film about the civil rights movement.

Or — more sinister — the practice in the old Soviet Union of airbrushing out inconvenient people from famous pictures. When Trotsky fell out of favor, his image simply … disappeared from famous depictions of the Russian Revolution.

He did not exist.

“First Man” may seem innocuous at first glance, but its assault upon objective reality is exactly the thing that Orwell was trying to warn us about back in 1948, when his novel was published —  not merely the denial of objective reality but its fungibility. In his fictional authoritarian state of Oceania, reality has no objective existence; it is whatever the powers that be claim it is.

If this is accepted by the mass of people, then the delusion becomes indistinguishable from reality.

In the novel, the heretic of one — Winston Smith — is tortured for thoughtcrime (insisting upon the existence of objective reality) by Inner Party fanatic O’Brien. He holds up four fingers and demands that Winston “see” five.

Eventually, Winston does see them.

How long before we are expected to believe that it wasn’t Americans who landed on the moon?

Gosling — an Ontario-born actor whose work I admire in films such as “Crazy Stupid Love,” “Gangster Squad,” and “La La Land” — wasn’t even alive in the summer of ’69. But he did grow up imbibing the postmodern idea that America never did anything great — defended the decision to efface the facts of history by excluding the flag-planting scene [4].

“I think this was widely regarded in the end as a human achievement,” he said.

Landing on the moon, according to Gosling, was an event that “transcended countries and borders.”

The “in the end” qualifier speaks volumes.

At the time — in 1969 — Armstrong’s first step on the moon was hailed (rather than “regarded”) as a very specifically American achievement. The world understood — and respected — that it was Americans leading the way for mankind, on behalf of mankind — and in the face of our Cold War enemy, the Soviet Union.

The space race was real, and there were only two countries running it.

Their goal seems to be to encourage people not merely to forget what happened on that long-ago day in the summer of ’69 — but to believe something else entirely happened.

It is insulting to diffuse the memory of the red, white and blue American space program by attempting to recast it as some sort of polyglot multinational “Star Trek” effort that “transcended countries and borders.”

It’s ironic — as well as sad and dangerous — that the makers of “First Man” (along with Ryan Gosling himself) appear to be not only uncomfortable with the facts about the Apollo program, but also seem to be purposefully trying to use their medium to excise those facts.

Their goal seems to be to encourage people not merely to forget what happened on that long-ago day in the summer of ’69 — but to believe something else entirely happened.

Looks like my new favorite “Ryan from Canada” will be Ryan Reynolds going forward.

Watch the trailer for “First Man” below: