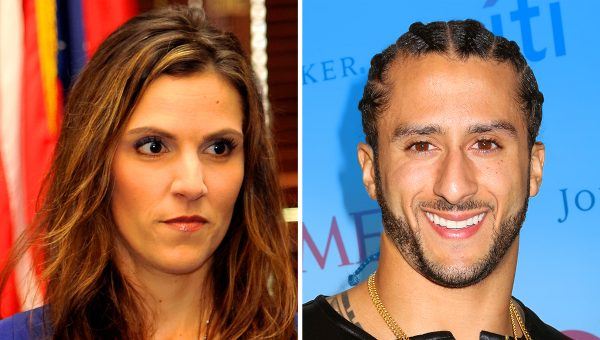 Nike has yet another high-profile critic [1] of its recent ad campaign featuring former quarterback Colin Kaepernick.

The ad, which features Kaepernick’s face and is meant to celebrate the company’s “just do it” slogan, has caused major controversy this week [2].

Fans have posted videos of themselves burning Nike products — and the company’s stock has taken a hit [3].

The main issue most people seem to have with the ad are the words put over Kaepernick’s face: “Believe in something. Even if it means sacrificing everything.”

Kaepernick, the former quarterback for the San Francisco 49ers and the originator of the national anthem-kneeling protests, has many supporters as well as critics.

Believe in something, even if it means sacrificing everything. #JustDoIt [4] pic.twitter.com/SRWkMIDdaO [5]

He says the NFL is working to keep him off the field due to his political activism; he was also a distracting player with only average stats.

Since leaving the NFL, his celebrity has only grown.

The word “sacrifice” surely belongs to people like late Navy SEAL Chris Kyle, whose military service and struggles were highlighted in the 2014 hit movie “American Sniper,” and in a book by the same name, co-authored by Kyle.

Kyle was murdered in 2013 while helping a veteran deal with PTSD issues. He left behind his wife, Taya (shown above left), and their two children. He served four tours in the Iraq War and received the Silver Star and four Bronze stars, among other awards.

Taya Kyle is among those who are unhappy with Nike’s new Kaepernick ad. Kyle’s widow, who now runs a foundation in her husband’s name, took to Facebook to blast the athletic gear company.

“Nike, I love your gear, but you exhaust my spirit on this one. Your new ad with Colin Kaepernick, I get the message, but that sacrificing everything thing,” wrote Taya Kyle. “It just doesn’t play out here. Sacrificing what exactly? A career? I’ve done that both times I chose to stay home and be with my kids instead of continuing my business climb … and it wasn’t sacrificing everything. It was sacrificing one career and some money and it was because of what I believe in and more importantly, who I believe in.”

She went on to say that the most Kaepernick sacrificed in leaving the NFL was some money — but plenty of other doors were opened for him.

She, then, as many others have done, highlighted former NFL player turned Army Ranger Pat Tillman, who died in the line of duty while serving overseas in 2004.

He left his NFL contract behind to serve his country.

She ended her thoughts by saying she would be joining the boycotts of the Nike brand. She wrote, “All I know is, I was actually in the market for some new kicks and at least for now, I’ve never been more grateful for Under Armour.”

For more on Kaepernick’s Nike ad, check out the video below: