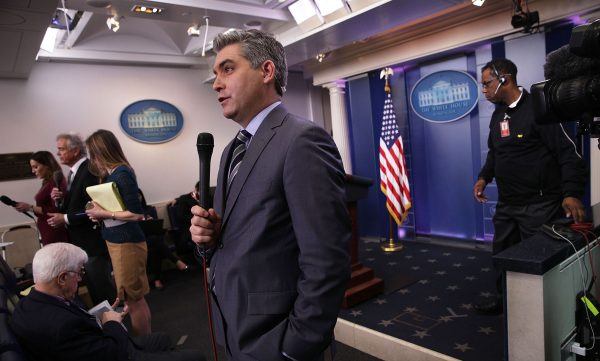 Talking heads like CNN’s Jim Acosta are in maximum meltdown mode over President Donald Trump’s tweets calling the “fake news” published by the liberal mainstream media “enemies of the people.”

Acosta (pictured above) demanded on Thursday [1] that White House press secretary Sarah Huckabee Sanders disavow her boss’s comment, then tweeted this: “I walked out of the end of that briefing because I am totally saddened by what just happened. Sarah Sanders was repeatedly given a chance to say the press is not the enemy and she wouldn’t do it. Shameful.”

Acosta has previously complained [2] that “people are developing their impressions of us by watching ‘Hannity’ and so on, and I say, ‘Hey, you know, give us a chance. Watch us, and then make up your mind.'”

OK, Jim, speaking as somebody who has proudly made his living as a journalist since 1985, I’m taking you up on your invitation, but there is one string:

You first have to ask special counsel Robert Mueller the following three questions, and then, when he or his flack give evasive responses, press in with the second, third, fourth and succeeding follow-up questions.

Note that these questions are based on citations gleaned from such notable right-wing internet conspiracy sites as The New York Times, The Washington Post, Business Insider, Huffington Post, and Perkins Coie.

I look forward to seeing you in your finest hours as a journalist in pursuing answers to these questions:

1.) Did Hillary Clinton collude with Russians in 2016? Here are two undisputed facts, Jim, that make this the most important unasked question of the Russia collusion scandal:

2.) This is equal justice? Why does Hillary Clinton get a pass — via anti-Trump obsessive FBI agent Peter Strzok’s artful editing [6] — on multiple violations of the Espionage Act with her home-brew email server, while Donald Trump gets a special counsel who, after more than a year, has yet to produce any evidence the president colluded with Russians as she did?

Please feel free to contact me for additional backgrounding on these questions, as what is provided above barely even skims the surface of the available evidence.

One more thing, Jim: Your grandstanding in the daily news briefing at the White House has made you, for better or worse, a symbol of the profession that I treasure and honor — and that hundreds of our former colleagues over the years have died [11] to advance.

You owe them, buddy.