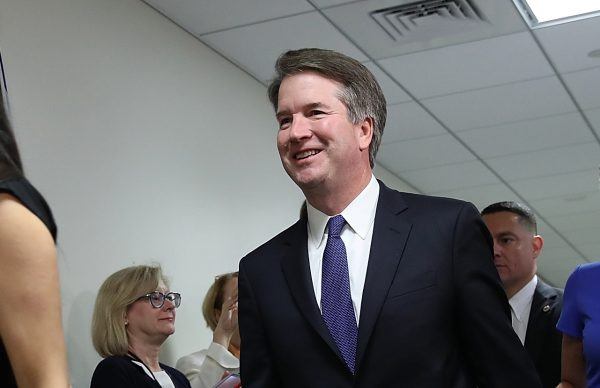 “Unfortunately some have tried to criticize what has been the most transparent confirmation process,” Grassley said during a committee meeting. “But I think they’re failing, and they’re failing because Democratic leaders have made their true goal obvious: Stall the nomination as long as possible in the hopes that the Senate might flip in the midterm elections.”

Grassley was speaking at a committee meeting convened to discuss and debate a dozen of President Donald Trump’s pending federal court nominees. Senate Minority Leader Chuck Schumer (D-N.Y.) is demanding copies of an estimated 1 million documents from Kavanaugh’s tenure working in the White House for then-President George W. Bush prior to his appointment to the federal judiciary.

Kavanaugh would be leaving the U.S. Court of Appeals for the District of Columbia Circuit, on which he has served since 2006. Bush nominated him to the circuit court, which is one of the most active and important in the federal judicial system.

“I think they tried to unsuccessfully apply the Biden Rule, which bars confirmations during presidential election years,” Grassley said. “When that fell flat, they generated a controversy about documents in a desperate attempt to delay the confirmation.”

Grassley claimed the Kavanaugh confirmation process has been longer than those of Justices Sonia Sotomayor, Elena Kagan and Neil Gorsuch; there will be 57 days between the announcement and the first hearing, which is scheduled for September 4.

Kavanaugh submitted the most robust bipartisan committee questionnaire at roughly 17,000 pages, according to Grassley. The judiciary panel also received nearly 250,000 pages of documents generated from his service in the executive branch, with more expected to come.

“Lest there be any doubt, we’re following the precedent set during Justice Kagan’s confirmation,” Grassley said. “Like Justice Kagan, we’re requesting a significant number of Judge Kavanaugh’s documents from his time in the executive branch.

“But both sides agreed not to ask for internal documents from Justice Kagan’s time in the solicitor general’s office because of their sensitivity. Likewise, we’re not asking for Judge Kavanaugh’s documents from his time as staff secretary.”

Grassley added that Kavanaugh’s documents are even more sensitive because they contain advice sent directly to the president and therefore fall under executive privilege. He also noted that the committee had a more compelling need for Kagan’s records because she lacked a judicial record.

“There have been some criticisms of how the review has been handled,” Grassley said. “These criticisms are groundless. First of all the National Archives are not being cut out of the process.

“[Former] President Bush is legally authorized to review his administration’s documents and decide which ones to release to the Senate and claim that others are privileged. That is exactly what his team is doing now.”

Judiciary Committee ranking member Dianne Feinstein countered during the meeting that the documents are important because even the smallest detail can be important in understanding his thinking and fitness for the court. His bid is particularly high-staked since he would give the highest court a solid conservative majority.

“Judge Kavanaugh’s confirmation hearing has been scheduled for September 4th, and that’s 19 days away,” Sen. Diane Feinstein (D-Calif.) said during the committee hearing. Feinstein is the panel’s senior Democrat.

“I want to say a few words on why the documents from his time in the White House should be publicly available in time for that hearing. The long-standing practice of this committee and the Senate is to ensure as much transparency as possible, and to ensure the Senate and American people have access to a nominee’s full record,” Feinstein said.

Feinstein added that nearly 100 percent of Kagan’s White House records were submitted to the committee and the public. Those documents went through the proper review process beforehand to avoid interfering with laws such as the Presidential Records Act.

Feinstein claimed that the committee has received only about 19 percent of what the chairman requested and 2 percent of all the records during the current confirmation process for Kavanaugh.

“My question for you, Mr. Chairman, is, can we use these documents to question Judge Kavanaugh at the hearing,” Feinstein said. “To make a confirmation decision on a nominee based on secret documents that are not available to the public or full Senate is extremely troubling.

“I’ve participated in 10 Supreme Court confirmations, and I’d like to take this opportunity to ask the chairman respectfully to ensure the records are released to the public before the hearing.”

Grassley responded, “The answer to your question is yes,” then said he will work with her to make sure committee confidential documents are available to the public. He added the reason some currently aren’t is because they were delivered to the committee early but are still being reviewed to ensure information that is legally confidential will not be revealed.

Schumer has also referred to Judge Merrick Garland’s having his confirmation delayed after then-President Barack Obama nominated him in 2016. Senate Majority Leader Mitch McConnell delayed the vote, claiming voters should have the opportunity to select the next president before the vacancy was filled. Trump then nominated Justice Neil Gorsuch, whom the Senate confirmed.

Sens. Heidi Heitkamp (D-N.D.), Joe Manchin (D-W.Va.), and Joe Donnelly (D-Ind.) broke with their Democratic colleagues [1] by meeting with Kavanaugh. Sen. Claire McCaskill (D-Mo.) is planning on meeting with him next week.