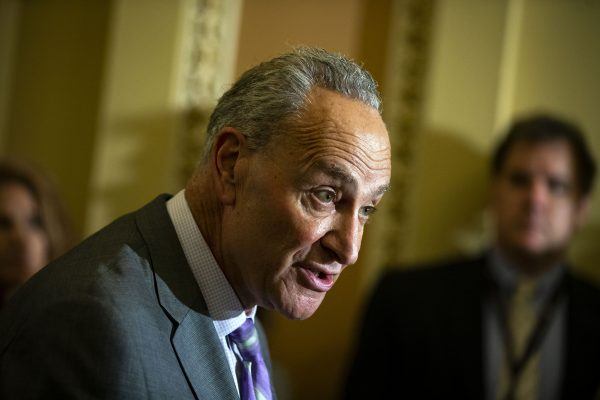 Senate Minority Leader Chuck Schumer (D-N.Y.) threatened on Thursday to go to federal court in hopes a judge will join his last-minute quest for a way to delay confirmation of President Donald Trump’s pick for the Supreme Court until after November’s election.

“We stand ready to sue the National Archives for Judge Kavanaugh’s full records, if necessary, if the FOIA request isn’t granted,” Schumer told reporters on Capitol Hill. “With this suit, we could finally shine some sunshine [1] on Kavanaugh’s records.”

Schumer is referring to an estimated 1 million documents — many, if not most, being covered by executive privilege — produced during Judge Brett Kavanaugh’s tenure working for then-President George W. Bush in the White House.

Kavanaugh was a senior associate counsel in the White House counsel’s office and then a confidential assistant to the president before Bush appointed him to the U.S. Court of Appeals for the District of Columbia Circuit, where he has served since 2006.

Approximately 250,000 documents from the White House period have already been turned over to the Senate Judiciary Committee, which begins hearings on the nomination September 4, according to the panel’s chairman, Sen. Charles Grassley (R-Iowa).

Kavanaugh was nominated by Trump July 9 to replace retiring Justice Anthony Kennedy. Democrats instantly mounted a fierce opposition campaign, with most of the Senate’s 48 Democratic members vowing not to support Kavanaugh and many refusing even to meet with him.

The Democrats’ anti-Kavanaugh onslaught is being reinforced by a large coalition of well-funded, tax-exempt, liberal nonprofit advocacy groups, including Planned Parenthood, the nation’s largest abortion provider and the recipient of hundreds of millions of federal tax dollars each year.

Grassley and other Republicans see the demand as nothing more than an attempt to delay the nomination process until after the midterm elections in November. Judicial Crisis Network chief counsel Carrie Severino argues the lawsuit threatened by the minority leader is more of the same.

“He knows there is nothing in these documents that is particularly relevant to Kavanaugh’s job as a judge,” Severino told LifeZette. “This is just the type of thing that gives him an excuse to give a press conference. This has been one of the most transparent processes in history. They’ve had Brett Kavanaugh on their shortlist publicly since November 2017.”

“You’ve got more of a judicial record on him than any recent nominee — I think all of the members of the current court, for example,” Severino said. “If you’re actually trying to evaluate Brett Kavanaugh’s record, there’s ample evidence to do so. That’s not what Chuck Schumer is doing. He announced day one, immediately after the confirmation, that he’s going to vote against him.”

Grassley argued during a judicial committee meeting Thursday that Kavanaugh submitted the most robust bipartisan committee questionnaire ever, at roughly 17,000 pages.

Schumer was among numerous Democrats who opposed the Kavanaugh nomination even before it was announced [3]. He has argued that delaying the nomination until after the midterms would be appropriate considering what happened to Judge Merrick Garland in 2016.

Former President Barack Obama nominated Garland toward the end of his term in 2016, following the death of Justice Antonin Scalia. Senate Majority Leader Mitch McConnell delayed the vote, claiming voters should have the opportunity to select the next president before the vacancy was filled. Trump then nominated Justice Neil Gorsuch in March 2017, and he was confirmed by the Senate.

Sens. Joe Manchin (D-W.Va.), Heidi  Heitkamp (D-N.D.), and Joe Donnelly (D-Ind.) were the only Democrats to vote for Gorsuch.

Kavanaugh has met with Manchin, Heitkamp and Donnelly, despite Schumer’s opposition. Sen. Claire McCaskill (D-Mo.) is planning on meeting with him next week. All four of these Democrats face tough re-election battles this year in states Trump handily carried in 2016.