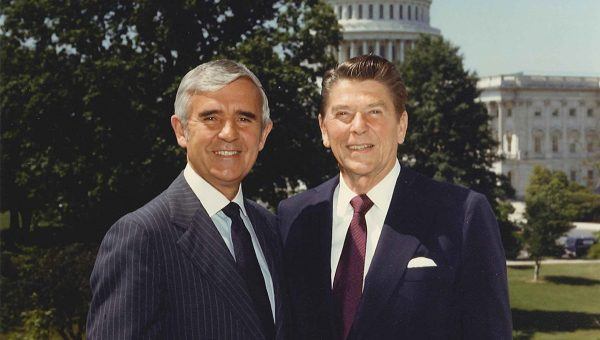 Former Nevada Sen. Paul Laxalt died Monday at the impressive age of 96 at a health care facility in Virginia. Through his near-century of life, Laxalt always championed American causes and conservatism, while embodying what it means to be an American and believing in underdogs when others didn’t.

I remember interning on Capitol Hill in the summer of 1977, and as I was walking down the hall of the Russell Senate Building one day, another intern nudged me, pointing to Laxalt walking toward us and said, “There is the nicest guy in the Senate.” He was right.

On that sweltering day, Laxalt was the picture of cool, wearing a seersucker suit and black cowboy boots. In later years we became friends, and he took a deep and abiding interest in my books about President Ronald Reagan and was always helpful.

Laxalt first became acquainted with the future president when the two men were neighboring governors, Laxalt in Nevada, Reagan in California. There, they hit it off and formed what became an alliance and friendship that endured as long as both lived.

During their gubernatorial tenures in the late 1960s and early 1970s, they worked together to create the Tahoe Regional Planning Agency to protect the beautiful Lake Tahoe. Though the agency’s results were “mixed,” according to biographer Lou Cannon, “Reagan and Laxalt gave it a chance.” Typical. They were both eternal optimists.

While Reagan retired (very briefly) from politics after declining to seek a third term as governor, Laxalt went national; he was elected in 1974 to the Senate as his state’s junior senator by fewer than a thousand votes, defeating then-Lt. Gov. Harry Reid in 1974.

Laxalt won that race despite disgraced President Richard Nixon’s scandals draped around the Republican Party. Laxalt’s victory was almost a miracle, with Watergate and Republican corruption and incompetence hanging over the heads of every candidate the party fielded. Paul was re-elected again in 1980 with nearly 60 percent of the vote.

Laxalt’s friendship with Reagan never faltered. Even as president, when Reagan sent  Laxalt a letter, he always signed it “Ron.” And Reagan made many, many references to their friendship in his speeches, diaries, and other writings.

“Paul Laxalt is both his closest friend and most trusted adviser,” said one aide. Indeed, Laxalt unabashedly supported Reagan in his 1976, 1980, and 1984 presidential runs, and regularly took on causes close to Reagan’s heart.

Laxalt provided the essential first push that conservatives needed to mount a counteroffensive to the Panama Canal Treaty in 1977, the single most important issue for America in that year. Reagan, again, was by his side.

Though the treaty was approved by one vote in the Senate, Laxalt and Reagan mounted an impressive grass roots-inspired campaign that hit at every American’s hearts. Laxalt was the linchpin for it all.

Throughout Reagan’s three presidential runs (1976 being a loss by the slimmest of margins, beaten at the GOP convention by the unelected chief executive, Gerald Ford), Laxalt, who served as national chairman of all three campaigns, was constantly by Reagan’s side, giving much-needed and often-heeded advice.

It was an unbreakable bond; there’s a reason his nickname was “The First Friend.” When President Jimmy Carter halted dozens of federal water projects in the Western states, which were designed to bring water into arid farming land, Laxalt quickly went to the phone, dialed Reagan, and with prescience, said, “I just met a one-term president.”

How close were the two men? At the 1980 GOP convention in Detroit, both Reagan and his wife, Nancy, wanted Laxalt for the vice presidential slot. They both detested the idea of picking George H.W. Bush (the obvious and best choice) and fought tooth and nail with aides for Laxalt. Only at the end did the Reagans reluctantly settle on Bush.

When Reagan defeated Carter in that November 1980 landslide victory, no small part of the credit went to Laxalt’s friendship and sage advice. Laxalt admitted that, because of their closeness, he could criticize and advise “Ron,” as he still called the chief executive – in ways that others in politics could not.

Sometimes, he personally delivered bad news, instead of other aides who feared presidential anger. And sometimes their friendship almost got Reagan into permissible misfortune.

According to The Washington Post in early March of 1982, “Laxalt is President Reagan’s closet elected friend, and Reagan thinks so highly of him that during the transition the president wanted to institutionalize the friendship by giving Laxalt a separate office and staff in the Executive Office Building. That ran up against the constitutional dictum on the separation of powers so, instead, Laxalt has become Reagan’s Ambassador-Without-Portfolio to the Senate.”

I never, ever remember anyone bad-mouthing Laxalt, something many had by then come to think impossible in post-Watergate Washington.

When there was a brief boomlet to draft Laxalt for president in 1987, I was proud to have been involved in the planning and execution. I never, ever remember anyone bad-mouthing Laxalt, something many had by then come to think impossible in post-Watergate Washington.

Laxalt was proud of his daughter, Michelle; his long-time confidante,Tom Loranger; his grandson, Adam, (a graduate of the Navy Academy and now a candidate for governor of Nevada); and, of course, his lovely wife Carol. Their home was always open to strangers, and they held a big Christmas Party each year to gather gifts for “Toys for Tots” with the U.S. Marine Corps.

Throughout his life, Laxalt remained loyal to conservatives, even in the face of disappointment. When Sen. Barry Goldwater of Arizona ran unsuccessfully in 1964 for president against the popular incumbent Lyndon B. Johnson, he faced a withering barrage of Democratic accusations of warmongering, nuclear warfare, and racism.

Nevertheless, Laxalt stood fast with Goldwater to the end, insisting when the Arizonan passed away in 1998 that “[Goldwater was] one of the giants of 20th-century American politics. Goldwater blazed the trail for the type of conservatism that has dominated government for the better part of three decades.”

So, too, was Laxalt. Although he typically remained behind the scenes, Laxalt helped form, pitch, and win many championships for the GOP. I’ve lost a good friend, and America has lost a war hero, a veteran of World War II, and a great national leader.

Craig Shirley is a New York Times best-selling author and presidential historian. He has written four books on President Ronald Reagan, along with his latest book, “Citizen Newt: The Making of a Reagan Conservative [1],” about the early career of former Speaker of the House Newt Gingrich. He lectures frequently at the Reagan Library and is the Visiting Reagan Scholar at Eureka College in Illinois, the 40th president’s alma mater. He also wrote the critically acclaimed “December 1941 [2].’