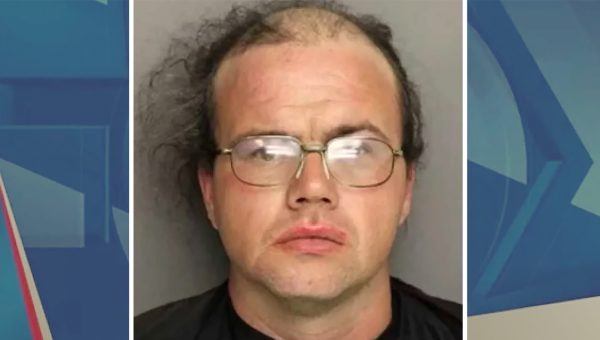 A Texas man donning a wig and makeup was apprehended this past Sunday while trying to video-record a woman in a ladies’ room in Greenville, South Carolina, according to local police.

The man, 38-year-old Shawn Thomas Hallett (shown above), was charged with the crime of voyeurism.

The unidentified female victim told police she entered the restroom at a QT gas station and knocked on the stall, according to Fox Carolina [1].

She was greeted by a male voice, accompanied by the spectacle of female shoes below the stall.

Unfazed by the discordant picture, the victim carried on, only to notice a cellphone slinking out from under the adjacent stall.

She apparently ended her restroom visit abruptly and reported the disturbing incident to the police.

Two witnesses said they saw Hallett leave the restroom and the store shortly thereafter. The police located the suspect near the QT gas station.

Hallett was apparently not hard to locate, since he was wearing a lady’s wig and makeup. The police also found the surreptitiously taken video on the suspect’s camera.

“While this doesn’t completely solve all problems [transgender people] face,” said state Rep. Selene Colburn [2] (P-Burlington), “this will … add more points that they can add onto their maps.”

Meanwhile, a relaxing of societal standards when it comes to bathrooms has perhaps led to unintended consequences, such as a man entering a Planet Fitness and working out naked [3] and another individual exposing himself to a child [4] in a Target store location last spring.

Target said the man who exposed himself was drunk when he entered the women’s bathroom at one of its Chicago stores, pushing into a stall that was being used by a young girl.

He shoved her out of the way and used the bathroom before leaving. The police are still searching for the man, according to the Chicago NBC affiliate WMAQ [4].

Evangelist Franklin Graham even weighed in, slamming Target for the incident in a Facebook post and urging his more than 6.7 million followers to boycott Target.

Why is anyone shocked? Target prides itself in its policy that allows biological men to use women’s restrooms. On Sunday…

In the post, Graham blamed the incident on the company’s bathroom policy, which was changed two years ago to allow transgender customers to use the bathroom or fitting room that matched their gender identity.

Check out the video below: