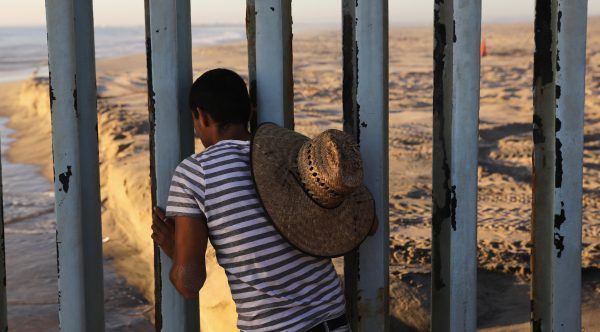 Any horrific shooting that makes national news brings a predictable cacophony of calls from progressives for gun control. But what if the Left applied that logic to immigration?

Instead, liberals tend to emphasize what they claim to be the relative rarity of crimes [1] committed by illegal immigrants, even as they treat much more unusual events — like police killings of unarmed black people — as a national crisis.

Here is a look at how the immigration debate might play out if the Left thought of it in the same terms as guns.

There would be calls for banning immigration. Banning all immigration into the United States in response to crimes committed by some illegal immigrants would, indeed, be radical. And irrational. No serious person has suggested that sealing the border and allowing no more immigrants ever again would be a reasonable approach to immigrant crime.

Yet, the most radical of gun control advocates demand that approach for guns. Rep. Eric Swalwell (D-Calif.) called for reinstatement of a ban on so-called assault weapons, along with aggressive measures to remove existing weapons.

In a USA Today op-ed [2], he wrote that “we should buy back such weapons from all who choose to abide by the law, and we should criminally prosecute any who choose to defy it by keeping their weapons.”

Compare that to the apoplectic reaction and lawsuits that followed President Donald Trump’s executive order mandating a temporary ban on travelers from a handful of countries tied to terrorism.

Liberals would highlight sensational crimes by immigrants. The culprit is clear anytime someone shoots up a school or a workplace, according to liberals — guns. Progressives are far more circumspect whenever an illegal immigrant commits a high-profile crime, such as the recent murder of Iowa college student Mollie Tibbetts [3].

The blame in those cases, liberals preach, rests with the individual murderers; don’t dare suggest that all immigrants or immigration policy bear responsibility.

There is good reason to argue that it is unfair to cast aspersions on immigrants, generally, for the murders committed by the tiny fraction of them. What about guns? There are roughly 11,000 homicides committed with guns each year and an estimated 393 million guns owned by civilians.

That works out to .003 percent of all guns used each year in homicides. And since some guns are used in multiple homicides, the percentage is even lower.

There would be calls to close the immigration background check loophole. Liberals for years have demanded that Congress close the “gun show loophole.” This is shorthand for people being able to buy firearms at a gun show without having to undergo a criminal background check.

But it is not really a gun show loophole at all. The “loophole” has to do with people who sell their personal guns. Federally licensed firearms dealers must run the background check whether the sales takes place in a store or at a show.

The federal background check requirement does not apply to people who do not have firearms businesses but want to sell from a personal collection. (Some states do require background checks even for those people).

Liberals issue no similar calls to close the immigration background check loophole, however. The United States admits roughly 1 million people legally each year, both through permanent immigration and on nonimmigration visas, such as those allowing foreigners to work or study in America. All of those foreigners undergo some type of background check.

But foreigners who come across the border illegally, by definition, evade all background checks. In fiscal year 2017, border and customs agents apprehended 415,191 illegal immigrants. Experts estimate that for every foreigner apprehended, one makes it through to the interior of the country.

That means roughly 28 percent of all foreigners moving to the United States each year have no background check.

Similarly, there is little evidence that criminals who use guns buy them at gun shows. But the issue regularly tops the list of demands of gun control advocates.

If you are looking for consistency in politics, in other words, don’t hold your breath.