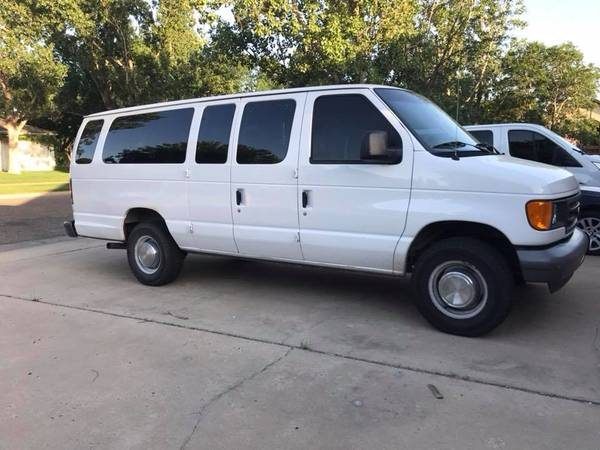 A side-splitting and totally relatable Craigslist ad out of Amarillo, Texas, is making the rounds on the internet, racking up readers and making many people feel far less alone in the universe.

The couple selling the white and very used 2005 Ford E350 XL Extended 15 passenger van for $3,800 are Josh and Careese Wood, according to Babyology [1]. They’re the parents of nine children — which explains the condition of their family van.

Their ad [2] was posted over a week ago, and the van — miraculously — did find a buyer.

“The van is missing a speaker in the side door. My kids have been throwing random items in the speaker hole for years. So, you may end up with some very special treasures. Or really old chicken nuggets. Probably both.”

It continues, “One side of the van has a yellow scuff mark on it. That’s courtesy of me and a battle with a yellow concrete parking divider (I did not win). The other side of the van has a matching white scuff mark. That one is courtesy of my wife. She completes me. In related news, you know how most cars these days come equipped with a fancy backup cameras? This one does not.”

The van owner continued, “My wife and I have used this van for the better part of a decade. We’re a lovely couple, but we sometimes inadvertently back into inanimate objects. Also, we’ve been forced to take defensive driving class a few more times than the average American …”

And this little gem: “When you open the side doors, the rubber door liner is detached in some places. It still does its job, but it looks stupid.”

Read this #FUNNY [3] ad / story about a 2005 Ford E350 XL Extended 15 passenger van for sale on Craigslist.. Seller is leaving this up for a few days because so many people loved it! #FunnyStories [4] #CraigsList [5]

The ad reveals the van did come with automatic door locks, but “unfortunately, they no longer work.”

“Somehow, something got reversed and the locking motor ran without ceasing until the button was pressed and held down. Rather than taking the van to a repair shop like a normal person, I duct-taped the button down to keep the motor from running. At some point the duct tape failed and the motor ran until it eventually burned up or something. Anyhow, the automatic door locks don’t work…”

Noting that they’re a family of 11, the poster also said, “Every one of our children has thrown up in this van at some point in the past decade — most notably, on this trip: http://www.joshwoodtx.com/college-station-2015/. We have had the van detailed a couple times since then (shout out to Xtreme Auto Re-Styling Center for tackling a level of depravity unrivaled in the world of passenger transport)…”

Finally, there’s the little matter of the vehicle’s air-conditioning: “The automatic windows work! This is good because the air conditioner does not. Well, it sort of works and sort of doesn’t. It works fine until you accelerate past -45 miles per hour. After that, the gas pedal essentially functions as an on/off switch for the air conditioner. Accelerate = AC off. Decelerate = AC on. I don’t understand why. But, then again, as you’ve probably gathered by now, I don’t understand most things about cars.”

Related: Why Americans Keep Flocking to the Ford 150 [7]

The poster updated his Craigslist ad days later with this: “Update 8/2: my goodness, world. Wow. Thanks so much for all of the interest! I’ve loved reading your many emails, responses, and commiserations (yes, I googled to make sure that was a real word) … The van has officially been sold (surprising me and likely all of you)! Again, thank you for all the wonderful responses. Feel free to keep them coming. It’s nice to know that we’re not alone in our smelly, intermittently cooled world.”

“Also, I’ve been asked by a number of wonderful people if I will leave the post up for a while,” he said. “Yes, I will. God bless!”