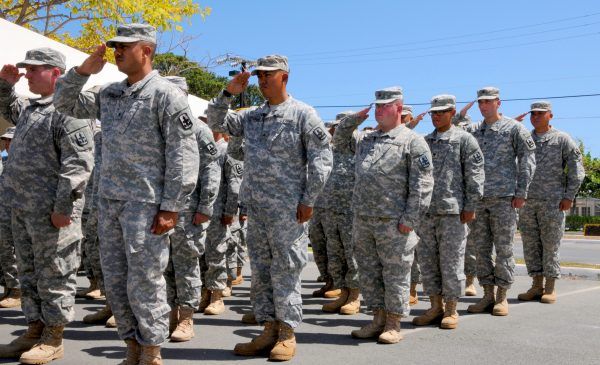 It’s no secret that military members and their families make countless sacrifices to do the important work that they do. Time away from loved ones, frequent moves, and long hours are just a few of the challenges military families face. As I write this, I am one of many military families living in a hotel room this summer, waiting for housing, after arriving in a new city in support of my husband’s military career.

That’s why words and gestures of appreciation mean so much. It helps to know that people see the hurdles that our military families confront. Critics will say that we know what we signed up for and that the military gets amazing benefits. And while that is often the case, it still helps to know that the general public, especially those who have not shared in this experience, see the not-so-great parts that we have to deal with and appreciate that we are willing to do so.

All of these challenges can make members of the military, their families, and veterans vulnerable. That’s where many individuals and organizations have worked to show their appreciation through donating, volunteering, or even creating nonprofits that benefit the military or veterans.

But, are all of those nonprofits actually working to help the military? Sadly, no.

Some of the self-proclaimed nonprofits have misled donors with words and statements that do not accurately portray where donations will go. Others failed to file necessary paperwork to establish their nonprofit status. The worst “charities” actually use donated money to line the pockets of individuals in the organization.

Major cases. Who are the people behind these fake charities? The most accurate way to describe them is as con artists. CBS’s MoneyWatch reported that some individuals have actually done this multiple times, such as the case of Utah-based Travis Deloy Peterson who is behind the organizations Veterans of America, Vehicles for Veterans, Saving our Soldiers, Act of Valor and Medal of Honor. The Federal Trade Commission has charged Peterson [2] with violating the Telemarketing and Consumer Fraud and Abuse Prevention Act.

Documents filed by the FTC indicate that Peterson “has created and used a series of corporate entities and fictitious business names that sound like veterans’ charities (collectively, “fake charities”) to operate a telemarketing scheme that uses robocalls to trick generous Americans into giving their vehicles or other valuable property to him.” According to the case, both the calls and the claims that donations go to help veterans make his actions illegal.

Neil G. “Paul” Paulson of Florida, in connection with fake charity Help the Vets, Inc., was also charged and settled with the FTC [3] and the states of California, Florida, Maryland, Minnesota, Ohio and Oregon “for falsely promising donors their contributions would help wounded and disabled veterans.” Paulson and some of his family members operated and sat on the board of supposed charities, including American Disabled Veterans Foundation, Military Families of America, Veterans Emergency Blood Bank, Vets Fighting Breast Cancer, and Veterans Fighting Breast Cancer.

As part of the settlement, Paulson will not be allowed to work with or for charitable organizations, including soliciting donations and management.

Operation Donate With Honor. These cases are all part of a larger coordinated effort to reduce the instances of individuals benefiting from charity efforts that are advertised to benefit veterans. The FTC announced a new initiative, Operation Donate With Honor [5], that will partner with law enforcement around the country to stop these fake charities. The program is “a coordinated effort to target fraudulent and deceptive fundraising for military and veterans causes.”

The U.S. Department of Veterans Affairs has also weighed in on the actions of these fake charities. “They discourage contributors from donating to real veteran’s charities,” said acting Secretary Peter O’Rourke of the fake charities. He urged those interested in donating to use the resources provided by the FTC so that they could donate with confidence. “I commend the FTC and its state partners for taking strong action on this important issue,” he said.

Substance abuse, unemployment, and service-connected disabilities and related medical needs are issues that many veterans face.

The states have long been working hard to stop scammers who seek to use charitable donations for their own gain. Connecticut Attorney General George Jepsen applauded his fellow state attorney generals for their efforts to “come together on matters of national importance to enforce, educate and advocate on behalf of our residents.” He continued, saying “[fraudulent charities] of any kind is abhorrent, and veterans charities fraud is especially upsetting. This campaign will offer important resources to help donors identify charities that match their own values.”

Veterans are one of the most vulnerable populations in America, with 11 percent of the homeless population having prior military service, according to the National Coalition for Homeless Veterans. Substance abuse, unemployment, and service-connected disabilities and related medical needs are also issues that many veterans face.

How to donate with confidence. Operation Donate With Honor also seeks to educate those wishing to make donations about how to spot scammers.

The FTC provides guidance for both private and corporate donors at www.FTC.gov/charity [6].

If you are interested in making a financial contribution to help veterans, there are plenty of great ways to do that.

Every legitimate nonprofit organization will have an employer identification number (EIN) and should be able to provide you with a copy of paperwork that shows the EIN and organization’s name. They should also be able to tell you how your donation will be used to support veterans.

Related: The Dogs That Fight for Our Veterans [7]

Nonprofits are also required to use donations as advertised. This means that if they tell you your donation will help build a new housing facility, it must be used for that and not other operating expenses or even benefit programs within their organization. Donations can also be made to the organization as a whole, to be used at their discretion.

CBS‘s MoneyWatch, in its article, also included references to a nonprofit research group, Charity Navigator [8]. Charity Navigator promises to provide a “list of highly rated trustworthy organizations providing a variety of services from lifting troops’ morale to offering financial assistance for food, rent, utilities, and medical expenses.” They assess an organization’s financial statements, work, and transparency to determine how reliable they are and if generous individuals should donate.

They create similar lists for a variety of focus areas, including broad topics such as civil rights and immigration, along with special issues such as disaster relief.

The work that the military and their families do on behalf of the American people deserves both recognition and support. Supporting veterans spans party lines and political affiliations. In the words of former first lady Michelle Obama, “Our veterans who fall on hard times and find themselves without a home deserve more than just hand-wringing or kind words. They deserve real help that gets them back on their feet.”

This sentiment was echoed by current first lady Melania Trump when she said, “I cannot, or will not, take the freedoms this country offers for granted. But these freedoms have come with a price so many times. The sacrifices made by our veterans are reminders to us of this.”

That individuals would seek to exploit the goodwill of generous Americans who want to support veterans is both unacceptable and unpatriotic. The FTC, along with their law enforcement partners at the state and local levels, is working hard to make sure that donations go to legitimate charities who are doing the important work of helping veterans.

Thank you to those wishing to give of their time, talent, and treasure to help veterans and their families succeed.

Thank you to the FTC, law enforcement, and all of those who work to make sure that these efforts go to actually helping those in need. And thank you to the veterans who have made sacrifices as part of their work in the military.

Katie Begley is an OpsLens contributor, a U.S. Naval Academy graduate and a former surface warfare officer. In addition to being a military spouse, she is a freelance writer specializing in travel, education and parenting subjects. This piece originally appeared in OpsLens.

Read more at OpsLens:
The Killer Cop Narrative Is Dead [9]
Another N.J. Sheriff Stands Firm: ‘We Will Not Voluntarily Become a Sanctuary City’ [10]