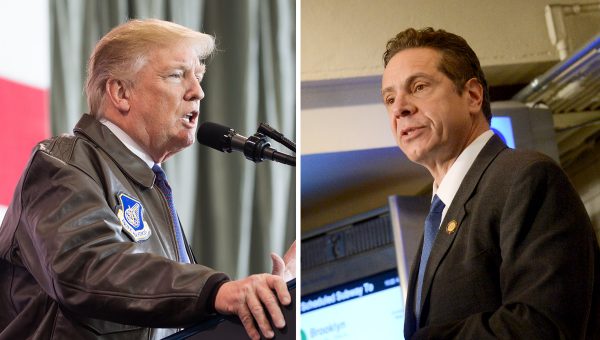 New York Gov. Andrew Cuomo (above right) made a stunning statement on Wednesday at a bill signing event in New York City, in a slap at President Donald Trump’s “Make America Great Again” slogan — but his misfire instead drew gasps [1] from some in the crowd.

“We’re not going to make America great again. It was never that great,” Cuomo declared to the crowd.

One can only imagine how this type of highly irresponsible and incorrect commentary affects veterans and our military servicemen and women — people who have given and who are giving their all for our nation.

“We have not reached greatness. We will reach greatness when every American is fully engaged,” continued Cuomo down his dangerous path. “We will reach greatness when discrimination and stereotyping against women, 51 percent of our population, is gone, and every woman’s full potential is realized and unleashed, and every woman is making her full contribution.”

After the remarks, a spokeswoman for the governor tried to mop up the message, saying Cuomo in fact “believes America is great,” which will become more evident “when every man, woman, and child has full equality. America has not yet reached its maximum potential.”

“When the president speaks about making America great again — going back in time — he ignores the pain so many endured and that we suffered from slavery, discrimination, segregation, sexism, and marginalized women’s contributions,” Cuomo’s press secretary, Dani Lever, said in the statement, as Fox News [2] reported.

“The governor believes that when everyone is fully included and everyone is contributing to their maximum potential, that is when America will achieve maximum greatness,” she continued.

It didn’t take long for President Trump to fire back at Cuomo, tweeting late Wednesday that the progressive Democrat was having “a total meltdown.”

Trump tweeted, “Can you believe this is the Governor of the Highest Taxed State in the U.S., Andrew Cuomo, having a total meltdown!”

“WE’RE NOT GOING TO MAKE AMERICA GREAT AGAIN, IT WAS NEVER THAT GREAT.” Can you believe this is the Governor of the Highest Taxed State in the U.S., Andrew Cuomo, having a total meltdown!

Cuomo reacted to the president on Twitter shortly after.

“@RealDonaldTrump: What you say would be ‘great again’ would not be great at all …We will not go back to discrimination, segregation, sexism, isolationism, racism or the KKK,” the tweet said.

.@RealDonaldTrump [4]: What you say would be 'great again' would not be great at all…We will not go back to discrimination, segregation, sexism, isolationism, racism or the KKK.

Like NY's motto says: Excelsior — Ever Upward (not backward) https://t.co/nrcUrsYJCO [5]

The New York Democrat is currently in a gubernatorial primary race against actress and activist Cynthia Nixon [7], and many consider him a potential presidential contender in 2020.

See Cuomo’s incendiary comments in the video below.