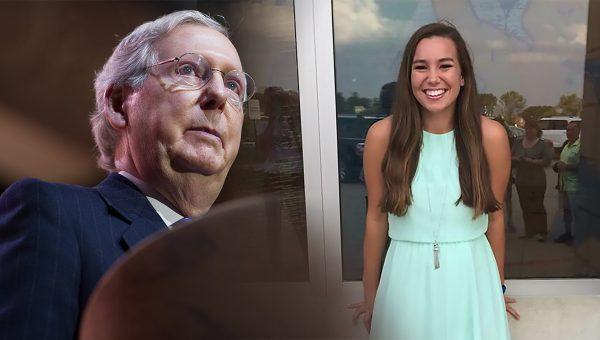 “So if I was advising this president, I would say, ‘Tell Mitch McConnell to go nuclear.’ You have to say this is a national security issue, a simple majority of the Senate to pass border security,” said Bossie, who was Trump’s deputy campaign manager in 2016.

McConnell (pictured above left) can change Senate rules with a simple majority vote of the chamber.

Tibbetts, a 20-year-old University of Iowa student (pictured above right), was reported missing last month. The five-week manhunt that ensued concluded in tragedy Tuesday when Rivera (pictured above) led authorities to a body believed to be hers.

Suspected murderer Cristhian Bahena Rivera, an illegal immigrant, told authorities he saw her jogging, got out of his car and ran alongside her, causing her to feel threatened. She said she was going to call the police, at which point Rivera said he blacked out. He then led authorities to her body.

Rivera worked for four years at Yarrabee Farms in Iowa using false identification, according to the farm’s co-owner. Rivera has been charged with first-degree murder, and his bond was set at $5 million.

“This is an unbelievable tragedy that the American people are revolted by, and it crystallizes this issue once again, that border security is our national security,” Bossie reiterated.

“The president wants a fully funded wall, $25 billion. How many more Mollie Tibbetts and Kate Steinles do we need before we spend the money?” Bossie asked. “And I would say to the Senate majority leader, McConnell, ‘Let’s go to 51 votes on this. This is a national security issue, and we’re done talking about it.'”

Steinle’s 2015 death at the hands of illegal immigrant Jose Ines Garcia Zarate in San Francisco came to the forefront of national discourse when Trump highlighted it during his 2016 presidential election campaign.

If Congress doesn’t act and pass the legislation Trump has asked it to produce, then there will be “more blood on politicians’ hands,” Bossie warned.

“This example in Iowa is another example that this happens in the heartland,” McEnany said. “I’ve sat across from a mother, Sabine Durden, that lost her son, Dominic. I’ve seen her tears. I’ve seen the locket she wears around her neck with his ashes.”