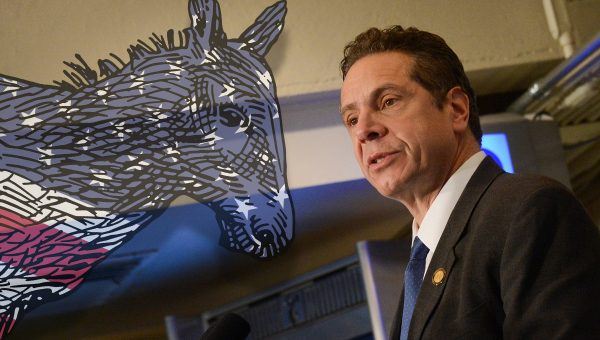 “We used to be able to agree on basic precepts, like we are a capitalist society, we are a great country, America is great,” McEnany said. “But now from the Democratic debate stage come 2020, you are going to hear anti-American rhetoric, you are going to hear anti-capitalist rhetoric, pro-socialist rhetoric. They’re destroying the very fabric of our country with comments like this.”

McEnany was referring to New York Gov. Andrew Cuomo’s controversial remarks during a speech Wednesday as he ripped President Donald Trump’s “Make America Great Again” 2016 campaign slogan. Cuomo (pictured above) stunned his audience when he claimed that “we’re not going to make America great again” because “it was never that great.” Audible shock was heard from the crowd at that point.

Ironically enough, when Cuomo announced his 2010 gubernatorial bid in a video statement, he said, “Together, we can make New York great again. Let’s get to work.”

After earning fierce backlash, Cuomo’s spokeswoman scrambled to provide clarification, insisting, “The governor believes America is great and that her full greatness will be fully realized when every man, woman and child has full equality.”

“It’s truly stunning, unpatriotic commentary there, anti-American even,” McEnany told Fox News’ Bill Hemmer. “You know, it’s incredible that we are seeing this trend not just from Cuomo but just this month, Bill, you had on top of that Cuomo remark [Sen.] Bernie Sanders [I-Vt.] saying America is fundamentally immoral and wrong, [Sen.] Cory Booker [D-N.J.] saying America is savagely wrong.”

“You had [Sen.] Elizabeth Warren [D-Mass.] saying our law enforcement is racist from front to back,” McEnany continued. “We are seeing a trend in the Democratic Party towards anti-American rhetoric, and we must reject it. That’s a stunning remark from Andrew Cuomo.”

Sure enough, Sanders trashed America during an interview Wednesday on “CBS This Morning” when he commented on the “growing resentment, not only among young people, who in many cases are going to have a lower standard of living than their parents, I think that there is an understanding or something fundamentally immoral and wrong about a nation in which we have three people who own more wealth than the bottom half of the American people.”

Booker bashed the U.S. during a speech at the Netroots Nation conference earlier in August, saying, “I’m a big believer that if America, if this country hasn’t broken your heart, then you don’t love her enough. Because there’s things that are savagely wrong in this country. There’s a normalcy of injustice that we’ve accepted.”

And Warren told a crowd at Dillard University earlier in August that “the hard truth about our criminal justice system” is “It’s racist” from “front to back.”

Now Cuomo, who is running for re-election this year, has taken the rhetoric a step further, McEnany warned.

“‘WE’RE NOT GOING TO MAKE AMERICA GREAT AGAIN, IT WAS NEVER THAT GREAT.’ Can you believe this is the Governor of the Highest Taxed State in the U.S., Andrew Cuomo, having a total meltdown!” Trump tweeted.

“WE’RE NOT GOING TO MAKE AMERICA GREAT AGAIN, IT WAS NEVER THAT GREAT.” Can you believe this is the Governor of the Highest Taxed State in the U.S., Andrew Cuomo, having a total meltdown!

Cuomo replied, “What you say would be ‘great again’ would not be great at all … We will not go back to discrimination, segregation, sexism, isolationism, racism or the KKK. Like NY’s motto says: Excelsior — Ever Upward (not backward).”

.@RealDonaldTrump [3]: What you say would be 'great again' would not be great at all…We will not go back to discrimination, segregation, sexism, isolationism, racism or the KKK.

Like NY's motto says: Excelsior — Ever Upward (not backward) https://t.co/nrcUrsYJCO [4]

“An incredible response by Andrew Cuomo there,” McEnany said. “President Trump was none of those things. He is equalizing the playing field for all races and genders. We see that in the economy.”

“But for Andrew Cuomo not to come out and apologize — they did issue a clarification, the spokesperson did — but for him not to come out and just flatly say, ‘I was wrong, there is no place for remarks like that. This is a great country with great people in it.’

“For him not to do that and instead to deflect blame and to, you know, wield this attack against the president, it just shows that he doesn’t even conceptualize how wrong his comments actually are,” McEnany insisted.