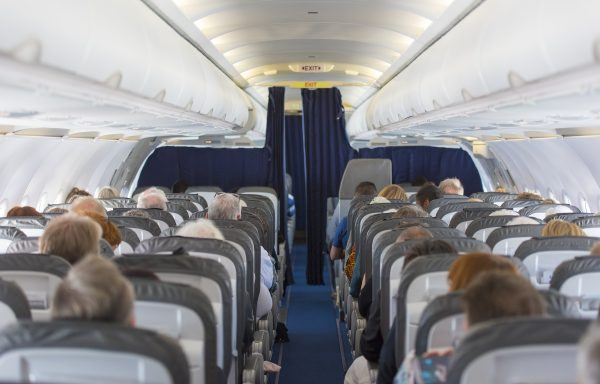 A government surveillance program that secretly monitors Americans on domestic flights, even if they are not suspected of any crime and have no ties to terrorism, is being questioned by civil liberties advocates and the general public.

The program — called “Quiet Skies” by the Transportation Security Administration (TSA) — has been in existence since 2010, when Barack Obama was in the White House. But it was disclosed to the general public this past weekend via reporting by The Boston Globe [1].

Twitter lit up with comments from those questioning the program in regard to civil liberties and constitutional rights: “Let’s see: potentially violates citizens’ constitutional rights, not evidence-based, a ‘waste of taxpayer money,’ and makes flyers less safe because it diverts air marshall [sic] resources from real threats. There’s something to love for everyone,” one user Tweeted, using the hashtag #quietskies.

Some air marshals say the program has them shadowing travelers who appear to pose no real threat.

“A businesswoman who happened to have traveled through a Mideast hot spot, in one case; a Southwest Airlines flight attendant, in another; a fellow federal law enforcement officer, in a third,” noted the Globe.

It is a time-consuming and expensive assignment, the air marshals say, which hampers their ability to do more important work.

TSA officials “broadly defended” the agency’s efforts to deter potential acts of terror, they said in a written statement provided to The Globe. But the agency would not say whether Quiet Skies has intercepted any threats — and it didn’t confirm the program even exists.

Release of such information “would make passengers less safe,” TSA spokesman James Gregory said in the statement to The Globe.

Thousands of Americans have been subjected to targeted minute-by-minute airport and inflight surveillance without their knowledge, which is reportedly carried out by small teams of armed and undercover air marshals, according to government documents.

Let's see: potentially violates citizens' constitutional rights, not evidence-based, a "waste of taxpayer money", and makes flyers less safe because it diverts air marshall resources from real threats. There's something to love for everyone. #quietskies [2]https://t.co/qAApqwrKU1 [3]

“The teams document whether passengers fidget, use a computer, have a ‘jump’ in their Adam’s apple or a ‘cold penetrating stare,’ among other behaviors,” records reveal.

Air marshals note these observations on individual airline passengers in two separate reports and send this information back to the TSA.

All American citizens who enter the country are automatically screened for Quiet Skies inclusion — their travel patterns and affiliations are checked and their names are run against a terrorist watch list and other databases, documents say, as The Globe reported.

The TSA described Quiet Skies as a “practical method of keeping another act of terrorism from occurring at 30,000 feet” in a statement to NBC News [5]. The agency compared the undercover surveillance to other common law enforcement practices, such as stationing a police officer in an area vulnerable to crime.

“Congress needs to know that it’s gone from bad to worse.”

In late May, an air marshal allegedly complained to colleagues about having just surveilled a Southwest Airlines flight attendant on a flight. “Cannot make this up,” the air marshal wrote in a message, according to the Globe.

A colleague reportedly replied, “Jeez we need to have an easy way to document this nonsense. Congress needs to know that it’s gone from bad to worse.”

I wonder what the TSA Marshall’s secret notes on me are like?
-consumed copious amounts of ?
-seemed nervous for first half of flight, was actually just waiting for the in-flight snack#quietskies [2]

“They haven’t demonstrated any need for it or whether it’s effective,” Faiza Patel, co-director of the Brennan Center’s liberty and national security program, told NBC News.

But what if Quiet Skies saves lives in the future? Some see that as a definite possibility in an increasingly uncertain world.

“People are upset about this ‘quiet skies’ program by the @TSA but will be the first to criticize the TSA if something bad happens,” one social media user tweeted. “When #redflags are raised, they will investigate. That’s all. Be happy they are doing something. #safetravel #tsa #QuietSkies.”

People are upset about this “quiet skies” program by the @TSA [8] but will be the first to criticize the TSA if something bad happens. When #redflags [9] are raised, they will investigate. That’s all. Be happy they are doing something. #safetravel [10] #tsa [11] #QuietSkies [12]