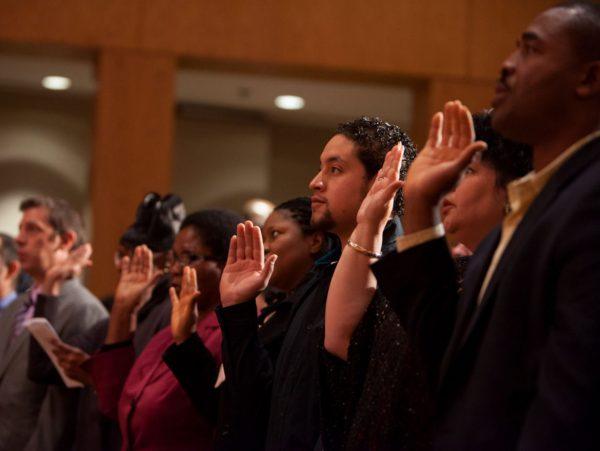 President Donald Trump recently suggested that illegal aliens should be sent back to their countries of origin without hearings and the years of litigation that often follow.

He branded the current process [1], which permits illegal aliens to repeatedly contest orders of removal, as “a mockery to good immigration policy and law and order.”

The mainstream media wasted no time in characterizing his suggestion as a “push to end due process [2] for illegal immigrants.” And multiple news outlets made all manner of wild claims about the so-called rights of illegal aliens. But once again, in an effort to portray the chief executive as a xenophobe, the open borders lobby has gotten its facts backward.

The open borders lobby and its handmaidens in the mainstream media have consistently represented this hodgepodge as a clear articulation of “affirmative rights.”

But that representation is misleading.

Illegal aliens are entitled to considerably less immigration due process [3] than their advocates would have us believe.

And the Supreme Court has been remarkably consistent on this point over the years:

Related: Some Illegal Immigrant Children Bring Plan B In Case of Rape [10]

What does this all mean? That foreign nationals outside our borders are not owed any due process whatsoever. The United States may exclude them at will. It also means that illegal aliens apprehended within the United States are entitled only to such due process as Congress accords them.

Congress could act to streamline their removal and provide the type of no-hearing framework that the president has suggested. In fact, it has already done so for certain classes [11] of aliens:

What about all of those asylum applications that illegal aliens supposedly have a right to file? As the Supreme Court made clear in INS v. Cardoza Fonseca [7], asylum is a discretionary form of relief. The United States is not obligated to grant asylum to anyone, even those who clearly qualify for it.

Because of this, Congress could pass legislation prohibiting those unlawfully present in the U.S. from filing asylum applications.

Far from “pushing to abolish due process for illegal aliens,” Trump is posing a legitimate [12] question. It’s time for Americans to start asking just how many of our precious tax dollars [13] should be spent providing illegal aliens with expensive immigration hearings to which they are clearly not entitled.

Matt O’Brien is the former chief of the national security division within the fraud-detection and national-security directorate at the U.S. Citizenship and Immigration Services (CIS). He has also served as U.S. Immigration and Customs Enforcement’s assistant chief counsel in the New York District. He is currently director of research at the Federation for American Immigration Reform [14] (FAIR).