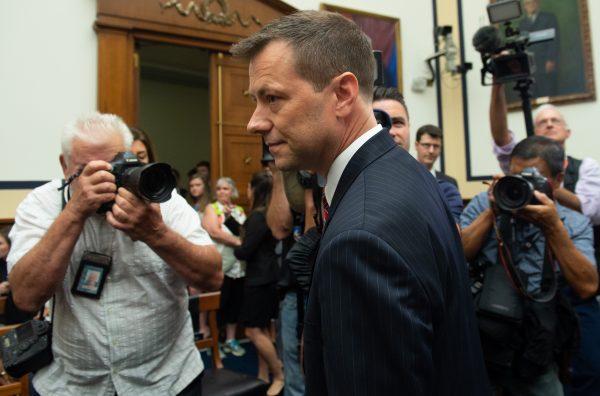 Strzok (pictured above) was the focus of an intense backlash after his anti-Trump text messages with former FBI lawyer Lisa Page came to light. He served as a top FBI counterintelligence official and participated in both special counsel Robert Mueller’s probe into allegations of collusion between Trump’s campaign officials and Russia and the probe into 2016 Democratic presidential nominee Hillary Clinton’s use of a private email server to conduct official business as secretary of state.

But Mueller removed Strzok from his team after the anti-Trump and pro-Clinton text messages with Page came to his attention. Strzok testified before congressional committees behind closed doors in late June before testifying Thursday in a public hearing. Page agreed Thursday to comply with her subpoena to testify Friday after defying the subpoena Wednesday.

Strzok insisted during the explosive hearing that the biases within his text messages didn’t translate into biased actions, arguing that lawmakers and FBI agents alike harbor political biases that aren’t supposed to affect their official duties.

“Strzok was one of millions of people who probably had those views. He’s the only person in America who opened up a counterintelligence investigation into Trump’s campaign,” DeSantis noted.

Former New York City Mayor Rudy Giuliani, now a member of Trump’s legal team, told Fox News host Laura Ingraham that he “spoke to about five former FBI agents tonight — including a former high-ranking one, very high-ranking one,” noting that those agents see Strzok “as a complete renegade, a complete scoundrel, and a criminal.”

“Every organization has some really bad people. This guy is a really bad guy,” Giuliani said. “And the reason the Democrats look so bad is they were stupidly defending him.”

Democratic members of the House committees participating in Strzok’s hearing broke out into choruses of objections and repeatedly spoke over GOP lawmakers attempting to question Strzok. Democrats even broke into applause after one of Strzok’s particularly defiant answers, and Rep. Steve Cohen (D-Tenn.) told Strzok he believed he deserved “a purple heart” for enduring the Republican onslaught.

“Those Democrats trying to protect that liar Strzok today should be ashamed of themselves,” Giuliani said.

Noting that Strzok boasted during the hearing about how he still held “a top-secret clearance with some SCI [Sensitive Compartmented Information] compartments,” Giuliani called it “disgraceful,” if true.

“I am ashamed of the Justice Department today. Why aren’t they moving against this guy? Why does he still have a security clearance?” Giuliani asked.

Although Mueller removed Strzok from the Trump-Russia probe once his texts with Page came to light, Giuliani still insisted that Mueller is “asleep at the switch” with a team filled with investigators who are registered Democrats and donated to Democratic causes.

“It’s being run by the same kind of Hillary partisans that [Strzok] is,” Giuliani said. “And they will frame Donald Trump, which is one of the reasons they’re trying to set a perjury trap for him. Thank God we’re tough enough to smell that out.”

Giuliani also revealed that the possibility of Trump actually sitting down personally to interview with Mueller is “probably further away” than before.

“They have never unraveled the taint that [Strzok] created,” Giuliani lamented.