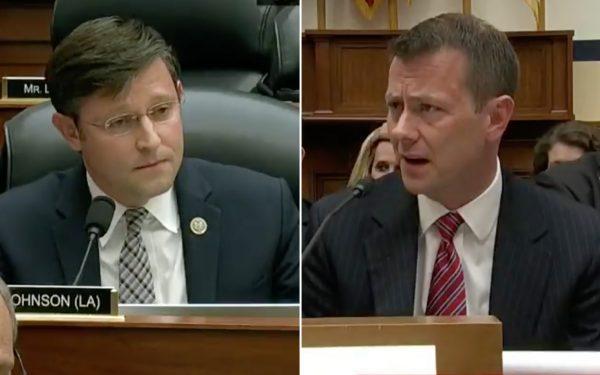 Over and over again during Thursday’s combative hearing, former FBI counterintelligence agent Peter Strzok argued that his repeated crude and bitterly critical cellphone comments to his bureau colleague and mistress, lawyer Lisa Page, were meaningless.

“I can tell you that those text messages are not indicative of bias,” Strzok (pictured above right) said many dozens of times, referring to the communications between himself and Page.

Repeatedly, Strzok also insisted that the recent Department of Justice inspector general’s report concluded his personal biases had no influence on any decisions the FBI made in its investigations of former Secretary of State Hillary Clinton’s use of a private email server to do official business and allegations that 2016 campaign aides to President Donald Trump colluded with Russian interests.

Just as often, Republicans at the joint hearing of the House Judiciary Committee and House Oversight and Government Reform Committee either read verbatim statements by Strzok from his messages — or required the embattled FBI agent to read his statements aloud.

And virtually every one of those exchanges concluded with Republican cross-examiners incredulously rejecting Strzok’s denial that his biases bore any significance to the hearing. They all but told Strzok that denying the obvious doesn’t make it go away.

Still, Strzok stayed glued to his claim, even when it forced him to offer other untenable assertions, such as not remembering writing a particular message but knowing exactly what he did or didn’t mean when he wrote it.

An exchange late in the day between Strzok and Rep. Mike Johnson (R-La.) almost perfectly captured the conflicting claims about the significance of the agent’s text messages.

The exchange began with this from Johnson, a freshman and thus one of the last committee members to question Strzok: “You’ve spoken in lofty terms today about the importance of ethics and honesty and integrity, yet by every objective measure the public record of your actions belie those virtues.

“And the inspector general’s report concluded that your conduct demonstrated ‘extremely poor judgment and a gross lack of professionalism.’ Why should this committee, why should my constituents back home, why should the American people trust you as a credible witness?”

Strzok responded, “Sir, I regret and I am sorry for the way those texts have cast my actions into question and those of the FBI and the investigation. What I am telling you and what I would ask you to relay to your constituents is to look at the facts, set aside the texts, look at what the IG found, look at the actions, the actions that I took, the actions …”

Related: Public ‘Got to See the Bias’ at Strzok Hearing, DeSantis Says [1]

At that point, however, Johnson (pictured left above) explained, “With all due respect, we cannot separate the texts from that question because the texts were written during the investigations, while you were in charge of these investigations, while you are the most important, responsible person in those investigations, and we cannot separate your personal views and bias from the facts, as they developed. That’s our problem and, at the end of the day, that’s what we are all still concerned about, even after all these hours of hearings.”

The text message that Republicans went back to repeatedly was when Page plaintively asked Strzok if Trump was “ever going to be president.” Strzok responded, “No. No he’s not. We’ll stop it.”

The text message that Republicans went back to repeatedly was when Page plaintively asked Strzok if Trump was “ever going to be president.” Strzok responded, “No. No he’s not. We’ll stop it.”

Pressed by Rep. Trey Gowdy (R.-S.C.), who chairs the oversight panel, to explain who his “we’ll” referred to, Strzok claimed he was referring in a generic manner to the American people.

Gowdy didn’t buy it. None of the other Republicans in the hearing bought it.

The basic question now is: Will the public buy it?