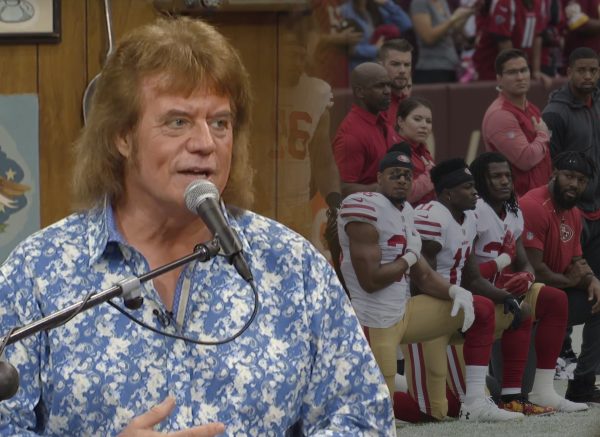 Musical artist Tim Atwood has a message for professional athletes who want to kneel for the national anthem.

The country music crooner told Fox News he disagrees with athletes who don’t stand for the anthem.

“I feel that if you’re on a knee on the football field for the national anthem, you should have a broke leg or you’re praying — one of the two,” Atwood said. “But that’s just my opinion. Everybody’s got their own opinion about that.”

The Grand Ole Opry veteran would love it if every player stood and recognized the flag and the nation that they call home — though he says each player can do what he wants.

“The whole thing is … you have the rights. The football players have a right to take a knee, but I don’t necessarily agree with that,” Atwood told Fox News. “That’s what the country’s about. Not everybody is going to like the same things all the time.”

The Nashville native, who has over 8,500 Grand Ole Opry performances to his credit, shared the source of his affinity and passion for the flag.

“I had a son in the Iraq War and he went two tours — he had a Purple Heart and he lost a lot of [his] hearing, he hit an IED,” Atwood said. “And to have him home safe knowing that he went over to serve his country — because of the folks that are fighting, we can have the freedom that we have.”

The country music favorite recalled the emotion and uncertainty of whether or not his son would ever come home after being deployed.

“I remember my son was in Samara and Ramadi … and I would wake up every morning and hear that there was a battle in Samara or Ramadi, and [was] just praying that he’s OK, you know,” Atwood recollected. “And there were times that would go by that I wouldn’t hear from him for two weeks or something, and you’re just wondering, Is he alive or what? You’re just wondering, you know.”

Atwood isn’t ashamed to express his adoration not only for our country, but also for his faith.

“I think the independence is choices — I got a choice to live a Christian life. I choose to take care of my family, and I choose to be an entertainer, he proclaimed. “And I’m thankful every day to live in a country that I’m allowed to do that. If it weren’t for the home of the brave, it wouldn’t be the land of the free.”

This Fox News [1] piece is used by permission.

Read more at Fox News:
List of Emmy Awards Nominations [2]
Lamar Odom on Moving to China: ‘It’s a Big Step for Me’ [3]
Stars Without the Warpaint [4]