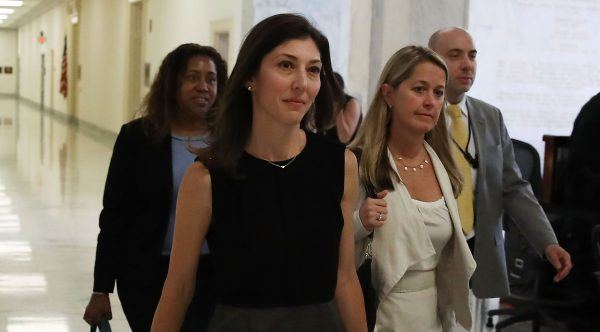 “As I said before, she is a very forthcoming witness,” Ratcliffe told reporters after leaving the hearing room. “She gave us a lot of new information that we didn’t have before. That will lead us to ask for some more people to make some more requests for information we do not yet have.”

The House Judiciary Committee and House Oversight and Government Reform Committee are hosting the hearing as part of their joint investigation [1] into the Department of Justice (DOJ) and FBI in their probes of Hillary Clinton’s use of a private email server and allegations President Donald Trump’s 2016 campaign colluded with Russian interests. They are trying to determine whether special counsel Robert Mueller’s investigation [2] into Russian meddling in the 2016 presidential election was started legitimately.

Strzok and Page became key witnesses when an estimated 50,000 text messages they exchanged while working on the government probes became public. Hundreds of their messages displayed crudely intense disdain and bitterness toward Trump.

Page is undergoing a second day of questions following the first on July 13. Rep. Matt Gaetz (R-Fla.) and other Republicans said she was more forthcoming [3] during the first day, too. She originally failed to comply with a subpoena to show up a few days earlier; her lawyer claimed they were not yet prepared.

Strzok and Page drew the attention of the congressional investigation when their texts were revealed publicly in December 2017. They had a long list of disparaging things to say about the president and even mentioned an “insurance policy” in the event Trump did win — they even mentioned a “secret society.” Strzok was eventually removed when his text messages came to light internally in August 2017, and Page left the bureau in May 2018.

Strzok testified during two closed-door hearings [6] that went late into the night on June 27. He returned to face questions during his first public hearing July 12. House Judiciary Committee Chairman Bob Goodlatte (R-Va.) had to threaten him with contempt proceedings [7] because of his refusal to answer questions. Strzok claimed he was forbidden by the FBI counsel to answer the questions.

Connor Wolf covers Congress and national politics and can be reached at [email protected] [8]. Follow him on Twitter [9].