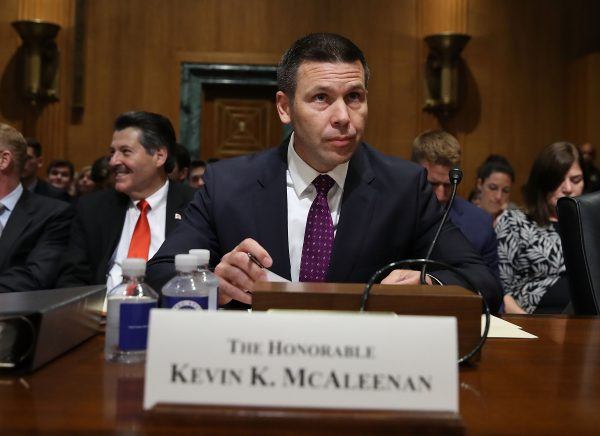 U.S. Customs and Border Protection (CBP) Commissioner Kevin McAleenan said Friday that far more unaccompanied children and family units have crossed into the U.S. illegally since 2013 than ever before.

“It’s really a dramatic difference, over the last five years, even,” McAleenan said during a conference hosted by the Bipartisan Policy Center. “We usually always had single adults, and usually males. Ninety percent through 2008 were single adults. Now we’re seeing this year a full 40 percent crossing our border are either children unaccompanied, that’s 15 percent, or family units, 25 percent.”

The changes were occurring over decades but accelerated dramatically during the past five years. Criminals have also taken control of more of the routes illegal aliens frequently use in coming to the U.S., he said. He cited a Doctors Without Borders study that found 68 percent of immigrants reported being victims [1] of violence along those routes.

Related: Hysteria Aside, Losing Track of Immigrant Kids Nothing New [2]

“Two-thirds of the migrants in the hands of smugglers are facing crime in the process,” McAleenan said. “They’re assaulted, they’re robbed, they’re extorted. And this is a really concerning stat: One-third of women and girls are assaulted in this process. And this is happening when they’re going through Mexico at the hands of transnational criminal organizations.”

McAleenan was interrupted several times by protesters in the audience who shouted references to illegal immigrant families being separated at the border.

McAleenan said there has also been a major increase in the illegal immigrants  claiming asylum without supporting documentation.

“From 2000 to 2013, fewer than 1 percent of those apprehended between ports of entry or encountered without documents at our ports claimed asylum,” McAleenan said. “Now we’re at 20 percent on average, just on CBP. And then additional asylum claims are made to ICE [Immigration and Customs Enforcement] officers.”

Attorney General Jeff Sessions announced May 7 that federal officials would begin strictly enforcing all existing immigration laws. Among the unintended consequences of the crackdown was an increase in illegal immigrant families’ being temporarily separated while their asylum claims were being investigated.

The asylum process typically takes longer than the 20-day maximum period that immigration officials are allowed to keep children and parents separated.

Yet another significant change in immigration patterns, according to McAleenan, is the severe decrease in Mexican nationals’ crossing illegally, with 2009 becoming the first year the number dropped below 90 percent. Three of the past five years have been more than 50 percent of illegal immigrants who aren’t Mexican nationals.