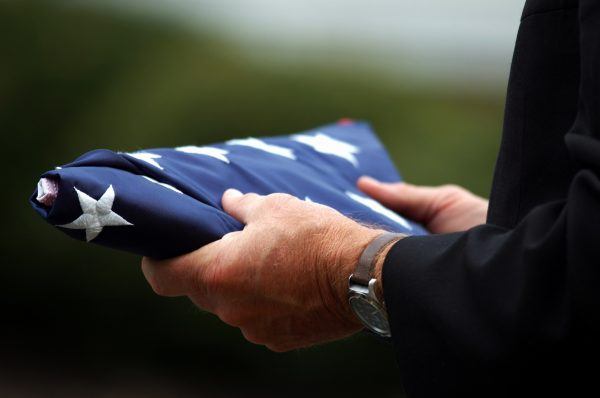 A Kentucky woman wants to bring Old Glory — and a little more — home to a grieving Indiana family.

Katie Marks said she was shopping at a Peddler’s Mall store in Bardstown, Kentucky, last week when she noticed a folded American flag for sale. It was dedicated to Samuel A. Steward, a fallen veteran.

“This flag is a symbol of our nation’s respect and gratitude for services rendered in defense of our country,” a paper inside its packaging read, next to a sticker advertising its $45 price.

“May God guide you and give you strength in this time of need.”

The paper said a Veterans of Foreign Wars post in Petersburg, Indiana, presented the flag in July 2004.

On a GoFundMe page [1], Marks explained that after buying the flag, she was able to track down Steward’s nephew — and is now determined to bring it home to him.

In conversations with him, Marks said the nephew told her his fiancée delivered a stillborn child in April. She eventually returned home from the hospital, but mounting medical bills linked to birth complications reportedly put the family into financial stress — and forced them to sell a storage unit where the flag was kept.

Related: American Flag Is ‘Blackened’ in the Name of ‘Art’ at This University [2]

“The storage unit was auctioned off and sold, and the Steward family lost countless sentimental possessions,” Marks wrote on the page; she’s now trying to raise $1,000 to assist the family.

“As a community, I have faith we can come together for this grieving family who has suffered such great loss, and return Uncle Sam’s flag along with a great surprise of financial assistance to ease their burdens,” she added.

Marks also told WHAS 11 [3] she learned Steward served in the Army and died when he was 40.

“You almost feel an emotional connection to the name, to the person behind the flag,” she added in an interview with the station. “Every soldier deserves to go home.”