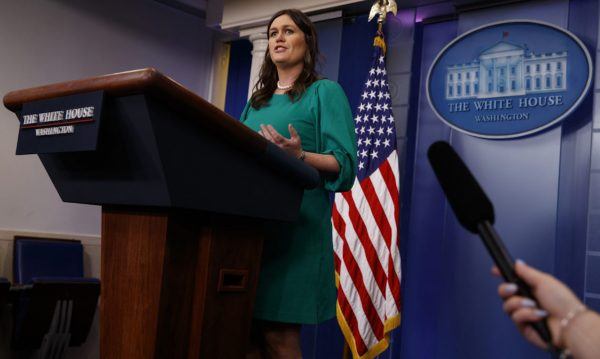 First, Kirstjen Nielsen, the secretary of Homeland Security, was heckled and hassled during an evening meal at a restaurant earlier this week — with people shouting “Shame!” (including an employee of the Department of Justice [1]) in relation to the Trump administration’s border policies and the processing of illegal immigrants.

Now White House press secretary Sarah Huckabee Sanders said in a Saturday tweet that she was kicked out of a restaurant in Virginia — simply because she is employed by the Trump White House.

Sanders explained on Twitter that the owner of The Red Hen in Lexington, Virginia, told her she had to “leave because I work for @POTUS and I politely left.”

The Friday night incident, said Sanders, revealed much more about the establishment’s owner than it did of her or her conduct.

“I always do my best to treat people, including those I disagree with, respectfully and will continue to do so,” Sanders said in her tweet.

Last night I was told by the owner of Red Hen in Lexington, VA to leave because I work for @POTUS [2] and I politely left. Her actions say far more about her than about me. I always do my best to treat people, including those I disagree with, respectfully and will continue to do so

The press secretary’s tweet about her treatment created a social media firestorm that is still going on at this hour — there are more than 24,000 retweets of her original message.

Scores of people from both sides of the political aisle have weighed in — and her own father, former GOP presidential candidate and Arkansas Gov. Mike Huckabee, was among them.

“Bigotry. On the menu at Red Hen Restaurant in Lexington VA. Or you can ask for the ‘Hate Plate,'” Mike Huckabee tweeted (see his full tweet below). “And appetizers are ‘small plates for small minds.'”

Earlier in the week, Homeland Security Secretary Kirstjen Nielsen had to cut short her own dinner at a Mexican restaurant after protesters gathered and kept shouting, “Shame!” at her — until she finally left the premises.

So according to the Washington Post — it was the Red Hen's gay staff that wanted Sarah Sanders to leave the restaurant. How typically intolerant of them. https://t.co/o0M4bbnela [4]

Hey y'all, we just heard something appalling and disturbing. This restaurant that kicked @SHSanders45 [6] and her family out needs to be shut down for discrimination! She's a woman who supports and works for Trump, they kicked her out; This is unacceptable!

Goes to show the Left is so unloving and intolerant they can’t even be in the same restaurant with a kickass conservative woman like Sarah. Imagine being that weak of a human you can’t stomach proximity to someone you disagree with politically. Weak! https://t.co/Kdc5Rs8lE7 [8]

Bigotry. On the menu at Red Hen Restaurant in Lexington VA. Or you can ask for the “Hate Plate”. And appetizers are “small plates for small minds” https://t.co/rHEVdcQwwh [10]

Tell us how you feel about this incident in the comments section below.