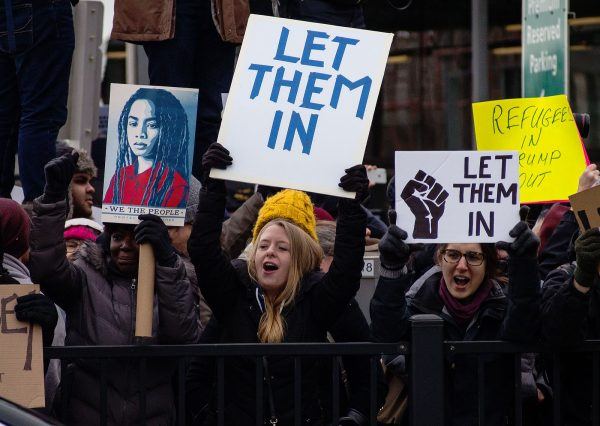 A 5-4 Supreme Court majority delivered a major victory to President Donald Trump with a ruling, announced Tuesday, that he is authorized by the Constitution and legislation as the nation’s chief executive to prohibit travelers [1] temporarily from seven countries he deemed security risks.

The so-called travel ban case was probably the most anticipated of the term. The court ruled that the Immigration and Nationality Act (INA) gives the president authority to determine which foreigners to admit into the United States and which ones to exclude.

“By its plain language, [the statute] grants the President broad discretion to suspend the entry of aliens into the United States,” Chief Justice John Roberts wrote in the majority opinion. “The President lawfully exercised that discretion based on his findings — following a worldwide, multi-agency review — that entry of the covered aliens would be detrimental to the national interest. And plaintiffs’ attempts to identify a conflict with other provisions in the INA, and their appeal to the statute’s purposes and legislative history, fail to overcome the clear statutory language.”

Justice Stephen Breyer, in a dissent joined by Justice Elena Kagan, argued that the injunction imposed by the San Francisco-based 9th U.S. Circuit Court of Appeals, should have remained in effect and that the case be sent back to the trial judge to consider allegations that the Trump administration has demonstrated anti-Muslim bias in its decisions to grant individual waivers.

“If this Court must decide the question without this further litigation, I would, on balance, find the evidence of anti-religious bias, including statements on a website taken down only after the President issued the two executive orders preceding the Proclamation,” he wrote.

Trump issued the first executive order in February last year but revised it twice. Lower courts had blocked the bans, but the Supreme Court — without making a final decision — allowed parts of the executive order to take effect. Verification of identities for individuals claiming to be citizens of those countries can be all but impossible.

The current iteration, ordered in September, bans most travelers from Iran, Libya, Somalia, Syria and Yemen. It also bans certain groups of people from North Korea and Venezuela. The administration had added the African nation of Chad to the list but later removed it.

The Trump administration argued that the president’s executive order was reasonable because all of the affected countries either are hostile to the United States or do not have functioning governments that can supply credible background information that U.S. officials could use to scrutinize people traveling to the United States.

Opponents argued that despite the inclusion of North Korea and Venezuela, Trump’s executive order amounted to an unconstitutional, bigoted “Muslim ban,” similar to one he promised on the campaign trail in 2015.

“Our Founders honored that core promise by embedding the principle of religious neutrality in the First Amendment,” Sotomayor wrote. “The Court’s decision today fails to safeguard that fundamental principle. It leaves undisturbed a policy first advertised openly and unequivocally as a ‘total and complete shutdown of Mus­lims entering the United States’ because the policy now masquerades behind a façade of national-security concerns.”

Justice Anthony Kennedy, who joined the majority opinion, wrote separately to emphasize the importance of the court’s assertion that it has jurisdiction to review the case in the first place. The Trump administration had argued that it was not an issue the high court could even review.

“It is an urgent necessity that officials adhere to these constitutional guarantees and mandates in all their actions, even in the sphere of foreign affairs,” Kennedy wrote. “An anxious world must know that our Government remains committed always to the liberties the Constitution seeks to preserve and protect, so that freedom extends outward, and lasts.”