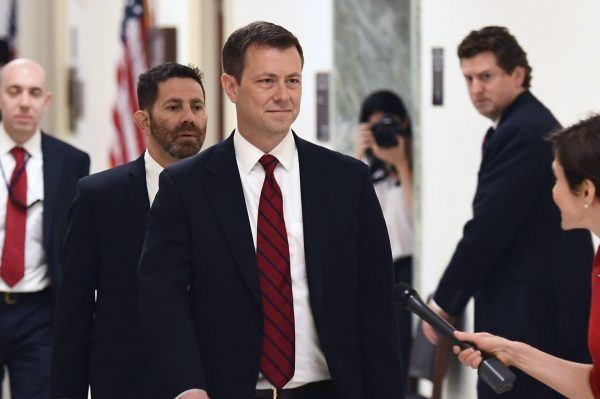 “The purpose of this is to gather information, to ask questions about documents that we now have in our possession, that took us a long time to get, and utilize the information in the inspector general’s report to ask a lot of questions to Mr. Strzok,” Judiciary panel chairman Rep. Bob Goodlatte told reporters near the end of the hearing. “And, as you can tell from the amount of time that elapsed, a lot of questions have been asked.”

At one point during the day-long hearing, House Freedom Caucus Chairman Rep. Mark Meadows (R-N.C.) came out to talk briefly with reporters and said he was unconvinced by Strzok’s answers to the questions being put to him.

Another House Freedom Caucus member, Rep. Ron DeSantis (R-Fla.), told saraacarter.com that the hearing “was a waste. Strzok is full of it, and he kept hiding behind [the] classified information excuse.”

“I just came out of the interview with Mr. Strzok, and basically what we have here is Republicans spending quite a bit of time re-investigating what the IG already investigated,” Rep. Elijah Cummings (D-Md.) told reporters during the hearing. “I do believe that this is an effort to try to shine some negative light on what special counsel Mueller is doing.”

Cummings is the ranking Democrat on the House Committee on Oversight and Government Reform.

Mueller was appointed last year by Deputy Attorney General Rod Rosenstein after Attorney General Jeff Sessions recused himself from all matters related to the collusion allegations. Mueller hired Strzok for the collusion probe but removed him soon thereafter, when thousands of his text messages to FBI lawyer Lisa Page demonstrated intense hatred for Trump.

Strzok, in one of the pre-election text messages to Page — when she asked him if Trump could become president — responded with, “No. No he won’t. We’ll stop it.” In another message, Strzok referred to an “insurance policy” in the event that Trump did win.

Department of Justice Inspector General Michael Horowitz released a massive report on June 7 detailing the results of his investigation of how the FBI investigated former Secretary of State Hillary Clinton’s use of a private email server and address to conduct official U.S. diplomatic business.

Horowitz cited many of the Strzok-Page exchanges and those of three other key FBI agents as evidence of deep-seated bias against Trump. But he said he found no evidence that the bias played a role in the decisions made in the Clinton probe.

Goodlatte had previously said there would be a public hearing in which Strzok will again be quizzed, but it was not clear Wednesday whether that hearing will in fact be held.

Connor Wolf covers Congress and national politics and can be reached at [email protected] [3]. Follow him on Twitter [4].