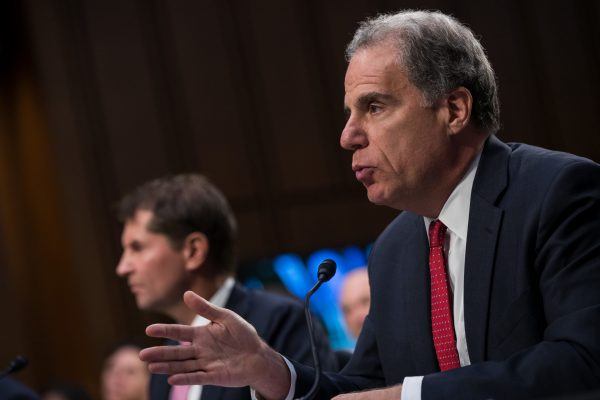 “Bias” is the fulcrum on which rests the FBI’s investigation of Hillary Clinton’s email scandal, with the word itself appearing more than 60 times in Thursday’s watchdog report. Yet the massive document repeatedly denies that partisanship influenced the probe’s conclusions.

To some, finding no political bias in the FBI’s conduct of the 2016 probe has the Solomonic ring of slicing the baby in half; but to many others the report’s voluminous evidence is itself a devastating refutation of the conclusion.

So, come June 18, Michael Horowitz, the Department of Justice (DOJ) inspector general (IG) and the official who gave final approval to the report’s content, will face a barrage of outraged questions from dumbfounded Republican members of the Senate Judiciary Committee.

Odds are, their anger won’t be cooled nor their bewilderment eased before Sen. Charles Grassley, the Iowa Republican who is chairman of the judiciary panel, gavels the hearing to order on Monday.

The basic problem for Horowitz is that hundreds of pages in his report describe jarring evidence of deep, clear partisanship expressed repeatedly by Peter Strzok, the FBI’s counterintelligence executive who led the email investigation; his workplace lover, FBI attorney Lisa Page; and at least three other key bureau officials involved in the probe.

Strzok and Page were also tapped for special counsel Robert Mueller’s investigation of allegations of collusion between aides to President Donald Trump’s 2016 campaign and interests with close links to the Russian government. That means bias expressed in the email review almost certainly could be carried into the Mueller effort.

Both Strzok and Page were removed by Mueller when thousands of their emails and text messages that reeked of anti-Trump bias became public, but Strzok remains on the government payroll. Page resigned in May, but there is no reason presently to think either she or Strzok will be unable to draw generous taxpayer-funded pensions.

The IG report focused especially heavily on a pre-election exchange in which Page pleaded to Strzok, saying, “[Trump’s] not ever going to become president, right? Right?!” Strzok responded “No. No he won’t. We’ll stop it.”

Even the IG conceded that the exchange “is not only indicative of a biased state of mind but, even more seriously, implies a willingness to take official action to impact the presidential candidate’s electoral prospects.”

Senators and others — think Kristian Saucier [2], the former U.S. Navy sailor — will ask who specifically was included in Strzok’s “we” and what measures did he/they have in mind to stop Trump.

In another exchange between two unidentified FBI executives the day after Trump’s upset victory over Clinton, one said,  “I am so stressed about what I could have done differently.” The second replied that “Trump’s supporters are all poor to middle class, uneducated, lazy POS that think he will magically grant them jobs for doing nothing. They probably didn’t watch the debates, aren’t fully educated on his policies, and are stupidly wrapped up in his unmerited enthusiasm.”

“POS” is a vulgar, insulting acronym.

Senators and others will ask what the first unidentified FBI executive have done that could in retrospect have affected the election outcome differently. And by what law, regulation or bureau policy did that executive think such actions were authorized?

Such examples of obvious political bias by FBI agents in key positions to shape the conduct and outcome of the Clinton email probe — let alone the election — leaves the IG report’s conclusion that the investigative team’s decisions and conclusions weren’t improperly influenced out on a limb without logical support or explanation.

Even the IG report qualifies its conclusion, saying, “We did not find documentary or testimonial evidence that improper considerations, including political bias, directly affected the specific investigative decisions we reviewed …” (Emphasis added.)

Indeed, no documents in which any of the central actors in the investigation described their motives or reasoning for decisions as being intended to help Clinton or hurt Trump. Similarly, no witnesses testified to hearing such explanations.

But the unchangeable fact remains that Clinton was spared condemnation and prosecution for conduct that was so worrisome to her defenders in the bureau that they felt compelled to change its description from “grossly negligent” to “extremely careless.”

That’s why Horowitz will be asked repeatedly and insistently, during Monday’s Senate hearing to explain why the massive evidence presented in his own report isn’t the obvious explanation for why America’s top law enforcement agency gave Clinton a pass.