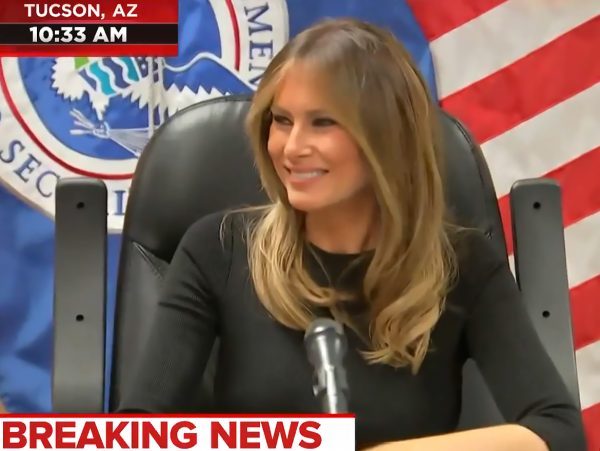 Melania Trump was on the ground in Tucson, Arizona, on Thursday. She visited the U.S. Customs and Border Protection facility there, met with officials, and toured the immigration and customs facilities.

“She cares about children deeply, and when the news started to hit [of child/adult separations], I think she was very concerned and wanted to make sure the kids are being well taken care of,” said her spokeswoman, Stephanie Grisham, as KGUN9 [1] and other outlets reported. “She doesn’t like to see parents and kids separated.”

The facility is about two hours away from the U.S. border, but it’s the first place parents and children together are brought immediately after their detention at the border, Grisham told ABC News [2].

At the facility, the first lady participated in a roundtable with U.S. marshals and border patrol agents, and local ranchers were expected to share their stories about what they’ve seen along the border — like the story of a six-year-old boy [3] who was found alone in the desert in Arizona.

The commissioner of U.S. Customs and Border Protection welcomed her, and indicated that 1,600 people crossing yesterday alone, calling it a “major challenge.”

“Thank you, first of all, [for having] me here, and thank you for all your hard work that you do, and I know how dangerous and difficult your daily jobs are, so I really appreciate all you do for our country, and on behalf of the country,” the first lady told the agents, officials, and ranchers. “I’m looking forward [to] our discussion, and to tour the facility, and I’m here to support you, give my help, whatever I can, [on] behalf of children and the families.”

“Thank you for having me,” she added, smiling.

NEW: First lady Melania Trump visits a border detention facility holding undocumented immigrants arrested at southern border in Tucson, AZ: "I know how dangerous and difficult your daily jobs are so I really appreciate all you do on behalf of the country" https://t.co/X7X0xxfHcB [4] pic.twitter.com/uUG7RoquKz [5]

Grisham noted that the purpose of the trip was for the first lady to educate herself on border issues, and to personally thank people for their dangerous and critical work.

Last week, her visit to Texas was cut short due to flooding, so the first lady was not able to get to all the planned stops that day. Grisham said Mrs. Trump is anxious to learn about the process at these centers, and continue to see how the new process is implemented.

Related: Melania May Have Played a Role in Trump’s Executive Order on Immigrant Families [7]

Grisham also noted that Melania Trump shares her opinions and thoughts about family unification with the president directly — and that he supported and urged her to make Thursday’s trip.

When asked if Melania Trump would continue these efforts and use them to affect policy, Grisham said she wants to first educate herself. She indicated the first lady wants to “talk to people and see things with her own eyes.”