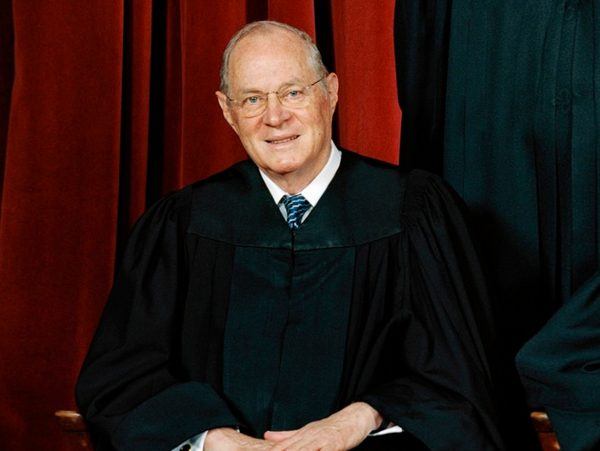 Kennedy, 81, announced in a letter to the president Wednesday that he intends to step down at the end of July. His announcement comes on the final day of the court’s Spring 2018 term.

Trump told reporters at the White House that he immediately would begin a search for Kennedy’s replacement, adding that he would pick from an expanded list of potential nominees he first released during the campaign. He praised Kennedy’s service.

“He’s been a great justice of the Supreme Court,” he said. “He is a man who has displayed great vision. He’s displayed tremendous vision, and tremendous heart. And he will be missed.”

Appointed by President Ronald Reagan, Kennedy was at the center of some of the court’s most momentous legal disputes over the past three decades. With the departure of moderate Justice Sandra Day O’Connor in 2006, Kennedy became the swing vote on the court.

Although Kennedy usually sided with the conservative wing, he provided the fifth vote to the liberal bloc on a number of big cases. Perhaps the biggest of those was the court’s 2015 ruling striking down bans on same-sex marriage. He also provided the key vote in 1992 to uphold the Roe v. Wade decision, guaranteeing a right to abortion.

“He has a great legacy in terms of federalism, recognizing the role of states in securing liberty,” said Carrie Severino, chief counsel and policy director at the Judicial Crisis Network.

Severino also said Kennedy will be remembered as a vigorous defender of the First Amendment.

“He’s been very strong on that issue,” she said.

A replacement in the mold of Trump’s first appointment, Justice Neil Gorsuch, likely would mean some cases in the future would be decided differently than if Kennedy were on the court.

“There certainly will be differences on the margins,” Severino said. “What’s important is the president is committed to nominating someone who is committed to ruling based on fidelity to the Constitution.”

“The Senate stands ready to fulfill its constitutional role … We will vote on Justice Kennedy’s successor this fall,” he said on the floor of the chamber.

Senate Minority Leader Chuck Schumer (D-N.Y.) urged McConnell to hold off on confirming a new justice until after the midterm elections.

“This is the most important Supreme Court vacancy for this country in at least a generation,” he said on the floor. “Nothing less than the fate of our health care system, reproductive rights for women, and countless other protections for middle-class Americans are at stake.”

Accolades for Kennedy poured in throughout the day. Wisconsin Solicitor General Misha Tseytlin, who clerked for Kennedy, called it one of the greatest honors of his life.

“Justice Kennedy devoted his tenure on the court to defending passionately the core liberties and structural protections of our constitutional system, while also scrupulously honoring the principles of mutual respect and collegiality,” he said in a statement. “I learned much from Justice Kennedy about how to conduct myself as a lawyer and, even more importantly, as a person.”

But talk quickly turned to how the court might change. For years, the punchline to a joke in legal circles — “What is the law?” — has been “Whatever Justice Kennedy says it is.”

Depending on Trump’s choice, however, the median justice could become Chief Justice John Roberts. That likely would mean fewer 5-4 decisions in favor of the liberals.

Joseph Tartakovsky, a former Nevada deputy solicitor general and author of “The Lives of the Constitution: Ten Exceptional Minds that Shaped America’s Supreme Law,” told LifeZette that Kennedy could be mercurial to court watchers.

“Kennedy has always been, in my mind, hard to predict,” he said. “He’s sort of a cipher to me.”

John Eastman, the founding director of the Claremont Institute’s Center for Constitutional Jurisprudence, said Gorsuch and Justice Clarence Thomas have shown a willingness to challenge the power of the administrative state. Trump has the opportunity to bolster that view, which could have a large impact in the future on the power of bureaucrats, he said.

“Getting a third person who’s already committed to those issues is huge,” he told LifeZette.

Eastman said Trump’s list is a good place to start.

“If it’s anyone from his list, it will be an improvement,” he said.

Jamil Jaffer, a former clerk for Gorsuch and founder of the National Security Institute at George Mason University’s Antonin Scalia Law School, argued that his former boss would be a great model for a second Trump appointment.

“The president now has a unique opportunity to appoint another justice like Neil Gorsuch who respects the rule of law and understands the carefully circumscribed role of judges in our constitutional system, which is to interpret the law, not make it,” he said in a statement.