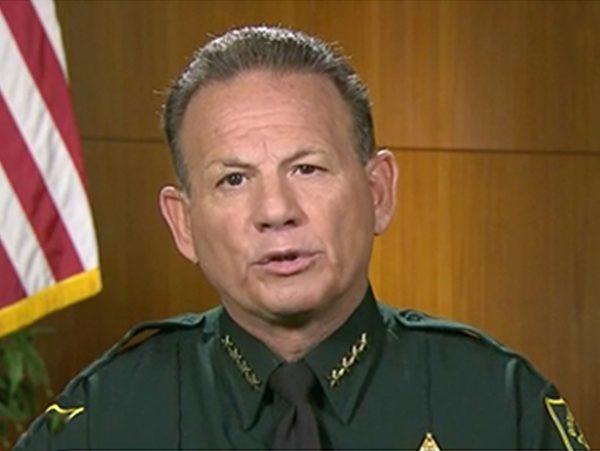 A nationwide search by the #NeverAgain crowd conducted a nationwide search for the guilty parties responsible for failing to stop Nikolas Cruz from committing mass murder in Parkland, Florida. They’ve turned their wrath on Sen. Marco Rubio (R-Fla.), Speaker of the House Paul Ryan (R-Wis.), Senate Majority Leader Mitch McConnell (R-Ky.), and the NRA, to name a few.

But what about those who were responsible for protecting Marjory Stoneman Douglas High School students and those who failed them miserably every step of the way? Why are they getting an excused absence from the #NeverAgain crowd for failing to do their jobs?

Noticeably absent from the lineup are Broward County Sheriff Scott Israel (pictured above left), Deputy Scot Peterson (pictured above right), the unarmed security monitors, the school administrators who shielded Cruz with the Promise Program [1], and the FBI agents who couldn’t locate Cruz despite his posting a literal map of threats under the name “Nikolas Cruz.”

In what could only be described as an anti-Republican, anti-gun owner witch hunt, the guilty here go without censure. Law-abiding gun owners who were nowhere near Parkland and had nothing to do with the horrible tragedy have “blood on their hands.” These folks have been accused, tried, and found guilty in the court of #NeverAgain.

This highly selective outrage of the #NeverAgain crowd is an attempt to distract the public’s attention from where the real culpability lies — at the feet of the local, state and federal government, along with the school itself. Parkland is a textbook case of one bureaucratic failure after another.

The Naples Daily News reported [2] that “Broward County deputies received at least 18 calls warning them about Nikolas Cruz from 2008 to 2017, including concerns that he ‘planned to shoot up the school’ and other threats and acts of violence.” Cruz was never charged.

Related: Parkland Parents Outraged After Disgraced Officer Portrays Himself as a Victim [3]

In September 2017, the FBI was notified about a user named “nikolas cruz” who posted a comment on one of his YouTube videos, stating, “I’m going to be a professional school shooter.” The FBI was unable to find “personal identifiable information on the user who posted the threatening comment,” and did not contact YouTube.

Five months later in January 2018, the FBI received another tip about Cruz when a family friend called to report his “troubling behavior and disturbing social media posts.” The FBI connected this new information with the September 2017 tip and did nothing with it.

Nikolas Cruz was a known danger at Marjory Stoneman Douglas. Andrew Medina, one of the unarmed security monitors, said that the school held a meeting during Cruz’s senior year specifically to address the potential threats Cruz posed. Medina also said that if anyone was likely to shoot up the school, it would be Cruz.

After that meeting, Cruz’s photo should have been displayed in every administrator’s office and given to every security monitor. A restraining order should have been taken out on behalf of the school against Cruz.

Shockingly, Medina couldn’t even remember Cruz’s name when he saw him charging into the high school with a duffle bag and backpack.

Because of school protocol, Medina couldn’t issue a code red. Ultimately, after Cruz began shooting, Medina drove off in his golf cart while the other unarmed security monitor hid in a janitor’s closet.

Two months before the tragedy at the high school, Steve Wexler, a retired Secret Service agent, identified serious security lapses at the school and warned administrators there that the school could be vulnerable. His recommendations fell on deaf ears.

Cruz had posted on Instagram that he planned to shoot up the school. A neighbor’s son told the Broward Sheriff’s Office, which forwarded the tip to Deputy Scot Peterson. Sadly, that’s where it ended.

Related: Relax, Parents — The Safest Place for Your Kids is Still School [4]

Over the past few months, the #NeverAgain groups have engaged in several “die-ins,” in which protesters lie down in places like Publix, a grocery chain, to publicize their alleged grievances.

The #NeverAgain protests have become little more than gussied up partisan political acts, devoid of any actual debate or discussion about solving problems of school safety or saving lives.

It takes an enormous amount of willful blindness to ignore this cascade of failures and incompetence by government actors and school administrators to protect the school and every student and employee in it.

Mark W. Smith is a constitutional attorney and New York Times best-selling author. His new book, “#Duped: How the Anti-gun Lobby Exploits the Parkland School Shooting-and How Gun Owners Can Fight Back [5],” was released this week.