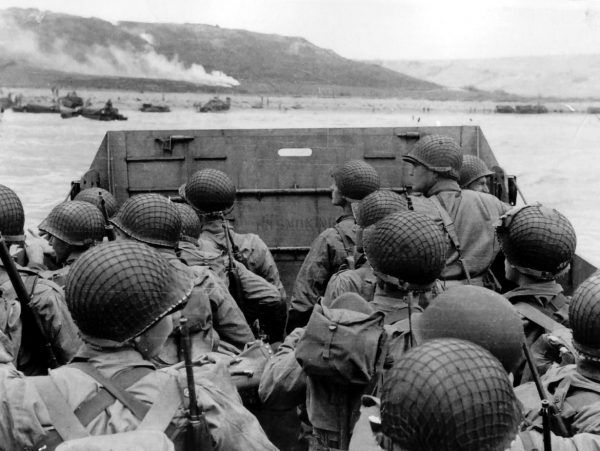 The World War II invasion of Normandy, France, occurred on June 6, 1944, an astounding 74 years ago Wednesday. Code-named Operation Neptune and popularly referred to as D-Day, it was the largest seaborne invasion in history and laid the foundations of the Allied victory on the Western Front.

More than 160,000 Allied troops landed on a 50-mile stretch of the heavily fortified French coast to fight Nazi Germany on Normandy’s beaches. Gen. Dwight D. Eisenhower — at that time a future president — called the operation a crusade in which “we will accept nothing less than full victory.”

More than 5,000 ships and 13,000 aircraft supported the D-Day invasion, according to the Army [1], and more than 9,000 Allied soldiers were either killed or wounded. Their ultimate sacrifice stands across the years as a testament to bravery and love of country — and it also allowed more than 100,000 soldiers to begin the slow march across Europe in the mission to defeat Hitler.

Those who did survive D-Day all those years ago are precious living examples of valor in conflict and service over self, but their numbers are dwindling.

Approximately 362 veterans die each day, and in 2016, only 620,000 of the 16 million Americans who served in World War II were alive, according to the U.S. Department of Veterans Affairs [2].

The nation lost one such hero and patriot with the passing of Seth McKee, a four-star general who died at age 100 on Dec. 26, 2016, in Scottsdale, Arizona.

Gen. McKee was the highest-ranking survivor of the invasion of France during World War II.

All Americans owe McKee a debt of gratitude — he was a member of the greatest generation, who secured the freedoms we enjoy today at great personal cost.

Freedom was never taken for granted by these brave men and women, so one can only wonder what those of this generation still among us today think of safe spaces on college campuses [3] and the liberal push for more “social justice warriors [4].”

Gen. McKee and men like him fought without blinking. In June 1944, McKee led a group of fighter planes that provided air cover for troops invading the beaches of Normandy. In a 2014 interview, he described his bird’s-eye view of the precision armada.

“I could have walked across those ship decks and kept my feet dry all across the English Channel,” McKee told AZ Central [5].

McKee said he engaged in dogfights inland during the war, flying 69 missions and taking at least one hit on most of them. He recalled nine consecutive missions on which his engine was shot out.

After the war, McKee held almost every rank in the Air Force, as AZ Central reported. His final post before retirement was as commander of NORAD, for which he earned his fourth star. (NORAD is the nuclear missile defense center in Colorado.)

In November 2016, on his 100th birthday, McKee was made a chevalier in the National Order of the Legion of Honour — France’s highest honor.

Related: 10 Ways Veterans Can Help Save Your Company [6]

William McKee, a son of the general, told AZ Central his father had turned down honors and ceremonies for years. He finally accepted what would be his last — so that his great-grandchildren could witness history. At that award ceremony, McKee unexpectedly rose from his wheelchair to receive the medal.

“My dad surprised everybody by rising up to the occasion to receive the honor,” William McKee said.

Related: Even with Endless Wars, America Has Fewer Veterans Than Before [7]

Like all great military leaders, McKee’s first wish was peace, not war.

“I don’t like war,” he said back in 2014. “When man has to resort to war to resolve his affairs, he’s reached about his lowest level. We’re back to the caveman days where you grab a club.”

An eight-year Army veteran understands this statement. “True warriors do not want war. Gen. McKee abhorred it, but he knew that it must be fought without fear if you want to win it,” John Cylc of Alcoa, Tennessee, told LifeZette.

“Men like him are what made this country strong.”

He said he chose service in the cockpit after watching planes soar above him while he marched with National Guard troops. McKee even remembered seeing the pilots’ scarves blowing in the wind. “By golly,” he recalled thinking, “if I ever get involved with the military, I’m going to be up there and not down here.”

“Men like him are what made this country strong,” said Army veteran Cylc. “See you in Valhalla, sir!”