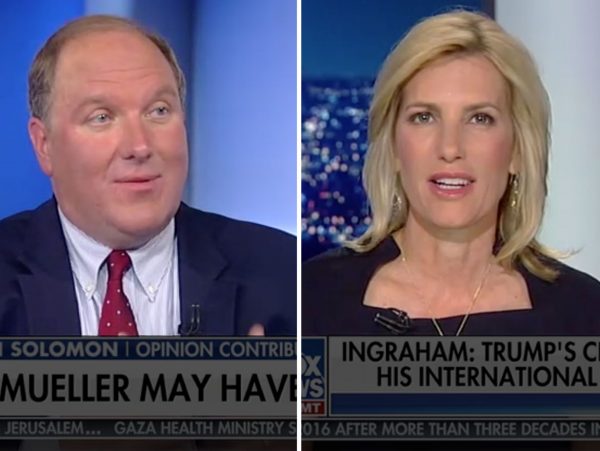 Solomon, an editorial contributor to The Hill, claimed in a bombshell report [1] Monday that “Mueller may have a conflict — and it leads directly to a Russian oligarch.” Deripaska, who had a “tortured” relationship with Manafort, once hired him as a political adviser and invested in a failed Manafort venture.

The Russian oligarch later sued Manafort, whose business dealings with Ukrainian officials connected with Russia and false statements to the FBI earned him indictments from special counsel Robert Mueller.

Deripaska was familiar to the FBI because he spent $25 million of his own money in 2009-2010, trying to obtain release of a retired bureau agent being held captive by Iran.

“And he lets out a big laugh,” Solomon said. “So the guy they go to is an enemy of Paul Manafort, and they say, ‘Well, can you help us prove that maybe Manafort’s colluding with [Russian President Vladimir] Putin to throw the whole election to Donald Trump?'”

“And he laughs, he breaks out in laughter, saying, ‘It’s preposterous.’ And they said, ‘No, seriously, take this seriously,'” Solomon continued.

According to Solomon, Deripaska told the FBI officials, “‘No, I’m telling you, it’s not true. I don’t like the guy. Listen — I’d love to smear him. I’m telling you, there’s no chance that Russia is using Paul Manafort to coordinate an election.'”

Ingraham responded, asking, “They go to [Deripaska] and they say, ‘We have a collusion idea.’ And he says, ‘Well that’s ridiculous.’ And they then say, ‘Keep an open mind,’ I understand?”

Ingraham said the FBI officials “were actually trying to collude with the Russian billionaire to push the Russian collusion theory.”

There are multiple reasons this information is important, Solomon told Ingraham, noting that this conversation occurred two months before the U.S. presidential election between President Donald Trump and Democratic presidential nominee Hillary Clinton.

The FBI used the infamous Trump-Russia dossier, authored by Christopher Steele and funded by the Clinton campaign and the Democratic National Committee (DNC) the campaign controlled. It did so to obtain and then renew the FISA surveillance warrants three times, according to a report from GOP members of the House Permanent Select Committee on Intelligence.

The conversation took place “before the FISA application” between FBI officials and “someone that the FBI trusted previously to give them reliable information, spend his own money doing FBI work,” Solomon noted.

Solomon was referring to another revelation in his piece in The Hill, that during Mueller’s tenure as FBI director in 2009, the FBI asked Deripaska “to spend millions of his own dollars funding an FBI-supervised operation to rescue a retired FBI agent, Robert Levinson, captured in Iran while working for the CIA in 2007.” The rescue attempt ultimately was unsuccessful.

“So [Deripaska’s] already been very helpful to the FBI. He spent $25 million of his own money trying to help them rescue one of their captured agents in Iran. So he has their trust,” Solomon told Ingraham.

Robyn Gritz, a former FBI agent who supervised the Levinson case, told Ingraham that “it’s outrageous that all this was going on.”

“It’s like — it’s stuff you see in the movies,” said Gritz (picture above right). “And to see that people that were working for the release of Robert Levinson have now switched and are actually pushing a political agenda.”

Solomon noted in his piece [1] that Mueller’s indictment of Manafort “makes no mention of Deripaska, even though prosecutors have evidence that Manafort contemplated inviting his old Russian client for a 2016 Trump campaign briefing.”

“Deripaska also appears to be one of the first Russians the FBI asked for help when it began investigating the now-infamous Fusion GPS ‘Steele Dossier,'” Solomon wrote.

“You haven’t even talked about the fact that the $25 million violates the Antideficiency Act of our government, where the government’s not allowed to take volunteer support from citizens if it’s not authorized by Congress,” said Dhillon, the founder of the Dhillon Law Group Inc. and the Republican National Committeewoman for California.

“Mueller may be trying to cover that up because it is embarrassing to him that he violated the law,” Dhillon added.