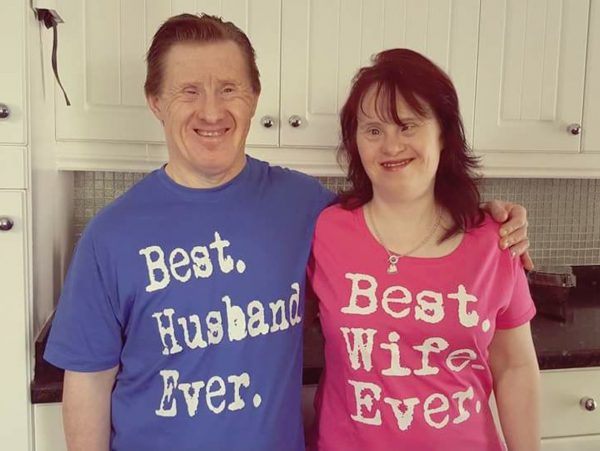 Meet a couple of lovebirds who give hope to other romantic couples around the world.

Companionship, closeness, and true friendship seem to be the key to long-lasting marital bliss for this dynamic duo.

Sure, marriage has its stresses: With 40 to 50 percent of all first-time marriages ending in divorce these days, according to the American Psychological Association [1], a walk down the altar is not alway a bed of roses. There are plenty of thorny challenges in matrimony for husbands and wives alike.

But while some marriages fall apart, others stand the test of time. Maryanne Pilling, 46, and her husband Tommy, 60, from Essex, England, will celebrate their 23rd wedding anniversary in July — a milestone in this day and age.

What makes their marital union extraordinary is that both husband and wife have Down syndrome, and they are thought to be the first such couple to marry in the U.K. (See the lovebirds celebrate their 22nd anniversary in the video below.)

Not surprisingly, when the joyful couple took the marital plunge nearly 23 years ago, their news was met with a mix of excitement and derision, according to Faithwire [2].

Since then, they’ve not only defied critics, they’ve shattered barriers on behalf of others with disabilities — a testament to love and grit. The couple live independently, and they have family members living in the house next door to them to help out as needed, as The Independent reported [3].

All life is meaningful. I think it's beautiful to see this married couple with Down syndrome celebrating 28 years of marriage https://t.co/H5a8Bqi9cl [4]

So what’s the secret to their success?

“Tommy and I never argue. I love my husband very much. He is my best friend,” said Maryanne PIlling, who met her husband in 1990 at a training center for people with disabilities, reported Faithwire.

Related: Babies with Down Syndrome Deserve Protection Before Birth [6]

Despite the naysayers, Lindi Newman, Maryanne’s sister, has been supportive of the couple’s marriage from the get-go. A Facebook page [7] dedicated to celebrating the couple is proof.

“Their marriage is like a fairy tale, and they are the most blissfully happy couple that I know. I think most of us could learn a thing or two from them,” Newman wrote.

Few people would argue with that.