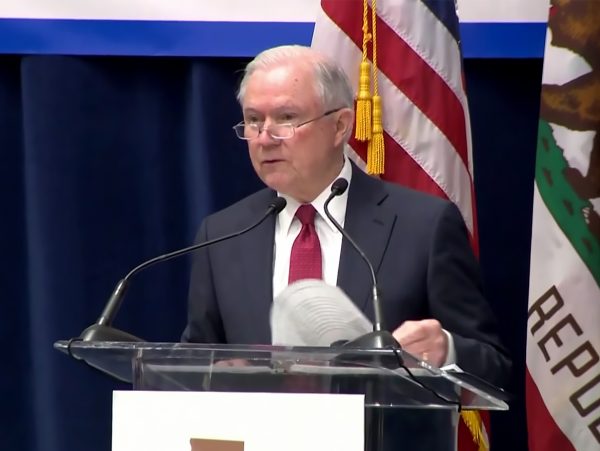 “If you don’t like that, then don’t smuggle children over our border.”

So said Attorney General Jeff Sessions to a recent law enforcement conference in Scottsdale, Arizona, while announcing [1] the new Department of Justice (DOJ) push to prosecute all adults caught with minors trying to cross illegally into the country.

The news follows the announcement that DOJ was adding 35 new assistant U.S. attorneys to the border to increase prosecutions of human smuggling along with other immigration offenses, including improper entry.

The AG’s self-described “zero-tolerance” approach is very exciting for pro-enforcement advocates and is sure to have huge deterrence effects. It could also be the move that cements Sessions as the foremost immigration policy leader in President Trump’s Cabinet, just as he was in the Senate. Or so it should.

To prosecute every adult accompanied with a minor for human smuggling could be the push that finally starts to cut down the three-year-long surge of family units arriving at the border. The rush of family units making the dangerous journey across Mexico was kicked off following a decision from Judge Dolly Gee of the U.S. District Court for the Central District of California.

She ruled that alien minors accompanied by their parents basically had to be treated as if they were unaccompanied, meaning they were entitled to a quick release from Immigration and Customs Enforcement (ICE) custody pending their removal hearing. [2]

The results were predictably disastrous. Immediately after the ruling, ICE and Border Patrol began noticing a newfound phenomenon of cartel-led smuggling groups matching up minors with illegal alien parents in the U.S. with strangers in Mexico and Central America to pose as their parents. Sessions’ latest move should thankfully put a big crimp in this practice.

Elsewhere recently, Sessions announced [3] a new streamlined hiring process for immigration judges (it currently takes an average of 742 days [4] to secure a new hire) plus a 33-judge increase at detention centers along the border.

This is on top of the 100 added across the country between March and September in 2017 (bringing the level up to 330). It will increase the speed at which cases are adjudicated and reduce the number of aliens who get released into our communities pending their hearings.

Median case-completion time is currently over 400 days, with outstanding cases [5] standing at just under 700,000. California’s case backlog alone is in excess of 130,000.

While the effects of more judges and prosecutions is easy to grasp, unfortunately for Sessions, he works in a very complicated part of the immigration system, and it’s unsurprising that other highly important reforms he’s put in place aren’t getting the level of media coverage they deserve (and perhaps being lost on critics in the White House [6]).

Take Sessions’ gradual moves on case referrals. Under 8 C.F.R. § 1003.l(h)(l)(i), the attorney general is empowered to refer cases before the Board of Immigration Appeals to himself for review — other agency heads can also do this and do so frequently.

Related: Here’s Why Jeff Sessions May Be Washington’s Slyest Fox [7]

So far, Sessions has done this for several longstanding, yet highly questionable, case precedents — cases that have been starting to seriously challenge the functioning of our immigration system. Take his referral dealing with the highly complex and increasingly unhinged “particular social group” ground for refugee and asylum qualification.

That ground, originally intended to harmonize with the law’s other persecution grounds, each based on immutable, easily discernible characteristics like one’s race, nationality, or religion, was interpreted more broadly in 2014 to encompass certain forms of domestic abuse and gang victimization.

These types of “persecution,” however, aren’t motivated by group membership, making these types of claims both widely applicable and easily fabricated. They’re certainly a major reason why asylum applications have more than doubled over the past four years. [8]

Equally unappealing to reporters is the attorney general’s referral of a case dealing with the immigration courts’ docket management tools, specifically so-called administrative closures and motions for continuance.

Each tool can generally be used when an alien charged with removability has an immigration benefit petition pending elsewhere that might eliminate the need for removal. The practice, however, incentivizes aliens’ attorneys to file frivolous petitions stretching out the removal decision, sometimes for years.

And similar to what’s become of the “social group” refugee ground, they’ve expanded so much that they’ve become de facto amnesties for otherwise removable aliens. In fact, under Obama, DOJ and ICE created a mass administrative-closures program, removing cases from the courts’ dockets indefinitely by the tens of thousands. [9]

I’m very confident the result will be an improved system that further puts the American people first.

How Sessions will decide these cases isn’t yet known; in each, he’s requested briefs from outside stakeholder groups to assist in the decision-making process. My organization, the Immigration Reform Law Institute, has submitted briefs in both.

Given the attorney general’s deep understanding of the problems in our immigration enforcement today, I’m very confident the result will be an improved system that further puts the American people first.

It’s certainly hoped the White House and many in the conservative media will soon begin to fully appreciate Sessions’ stellar leadership as the nation’s chief immigration enforcement officer and let him do his job to protect the homeland.

Dale L. Wilcox is executive director and general counsel at the Immigration Reform Law Institute, [10] a public interest law firm working to defend the rights and interests of the American people from the negative effects of mass migration.